June 6, 2020: Since June 2020 is a significant month for Supreme Court (SCOTUS) decisions within the coronavirus contagion time frame let's took a look at the founding Horoscope for SCOTUS (February 1, 1790 9:00 am LMT NYC is the chart I use) and an unpleasant discovery: that the June 13, 2020 Mars-Neptune Conjunction lands directly upon the natal Saturn of the highest Court in the nation. Checking other significant US charts against Mars-Neptune @20Pis56, I found no other horoscope that resonated as closely with the conjunction except for the SCOTUS horoscope (1 minute orb). This doesn't meanthat there aren't any, it means that of the ones in my files I found none and this includes the Federal City Horoscope of April 21, 1791!

Naturally, everyone knows that realistic Saturn in Mundane Astrology is associated with law, attorneys, judges, courts, legal systems, lawmakers, government, business, and such along with the status quo and The Establishment. Time, tradition, standards, regulations, structures, limits, restriction, authority, authenticity, accountability, consolidation, seniors, managers, isolation, concentration, hard work, failure, and loss also come under karmic Saturn's rather wide umbrella. Yet in watery Pisces, solid Saturn can have a difficult time since his placement there reveals a karmic planet in a karmic sign so obviously the correct channeling of Saturnine energies can make or break an institution or an individual. For as you know, Saturn demands much but will (eventually!) reward those who follow his precepts in a responsible way. And with America's natal Saturn (1776) in Libra where Saturn is exalted (expresses best), we've come to expect that SCOTUS will carry out its traditional duties in the most admirable way possible - not always a realistic expectation, but it is always to be hoped, even in these trying times. 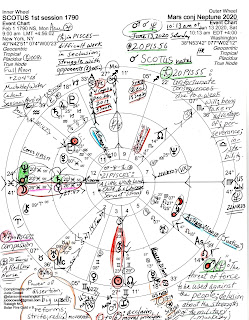 Yes, too many scribbles are squished upon the chart/s (mea culpa!) but hopefully you can enlarge the image to read them if you wish. Upper right contains a few of the potentials of the midpoint picture Mars-Neptune = Saturn but I'll also type them here for you: unfortunate consequences due to a weak will; being taken advantage of; perseverance; instability - and there's a bit more that couldn't be squished in such as: misdirected energy; feelings of inferiority; lasting weakness or illness; blocking of anger toward people who avoid reality (by intimidation, threats, blackmail?); frustrations encountered when punishing those who deceive others; pessimism over arguments received from clerics; reticence; a sense of futility. And to 'perseverance' add, in spite of fear.

Confusion, deceit, and/or some type of paralyzed activity may also be notable around the time of the blending of these energies particularly since America's problematic Mars-Neptune square may be involved with the Court's cases, people, and/or decisions. That's US natal Neptune @22Vir23 conjunct Descendant and US natal Mars in 3rd house near the Sun-Chiron conjunction which suggests a focus on dealing with moral and ethical principles and receiving acclaim for it.

Neglected notes not penned on the June 18, 2020 chart include: Hour: Sun; Sun-Moon: 3rd quarter +273:35 = crisis in consciousness: and hidden manipulator Pluto Rx in Capricorn leads a BOWL shape of the planets, and he's bossily tilted toward success no matter the cost.

Now the Mars-Neptune Conjunction perfects on a Saturday (Saturn's day!) but note that on the SCOTUS calendar Opinion Issuance Days in June (Mondays) include June 15th, a mere two days after the Conjunction so we'll see what transpires and which cases and topics the Justices address. And if they appear to be acting independently of outside influences.