The Statue That Binds White Supremacy, World War III, Trump, and the US Congress 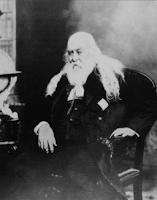 The ongoing political and personal barbs between Senator Bob Corker and Donald Trump concerning Trump's irresponsible remarks and tweets that could "start World War III" and the continuing Confederate statue removal debate that seems determined by higher powers to delete US history from our eyes, reminds me of the one statue above all others that should be removed for it ties together The Confederacy, white supremacy, World War III, and Donald Trump with his racist brothers in Congress.

Yet as a Southerner with ancestors who fought in the 'Civil' War, I agree with 'our' General Robert E. Lee who in his day made it clear that we should not glorify the war that divided us but move forward with the United States of America and that we should not raise our children to hate the US government!

The now-protested statue of which I complain--and the one that to me should be removed from DC's Judiciary Square before all others--is that of Confederate General Albert Pike--in his day the grand poo bah of Masons, a founder of the Ku Klux Klan, member of the Knights of the Golden Circle, and major promoter, some say, of World War III.

But of course, there are those who claim that Pike's 1871 Letter to Mazzini which lays out the Illuminati goals for fomenting three world wars is a hoax. Perhaps you're one of them! Yet if there is skepticism over the letter and its war 'plans' among those-in-the-know it may be a simple question of timing, of not letting the cat out of the war bag before all is in place for global conflagration, victory assured. At war's end these wealthy chaos-creating meddlers expect they will be able to "build anew upon ruins" a totalitarian global government as if it's a good idea and the only course of action. A fret concerning this globalism topic is the upcoming Solar Eclipse of August 2018, nicknamed, The Tower with its theme of collapse and rebuilding.

Well, here's a previous post which includes an informative video Who Is Albert Pike? If you've never taken a few minutes to watch it, please do so now for it directly relates to the current white supremacist in the White House, the man-baby Senator Corker recently said out loud could "start World War III"--something I believe most members of the Republican Party, their enablers in DC (including corporate Dems), and certain bankers want very much to start--many for financial reasons, some for religious or ideological craziness pretexts, and many to establish a 'new world order'--as if God's plan for the world can be rushed by arrogant, greedy idiots!

See An Update Horoscope of the New World Order which is timed by the third Great Conjunction of Uranus and Neptune (18Cap) where transit Pluto hangs out these days ("the big picture demands a certain course of action which must be followed--" and you know that Albert Pike was many things including an astrologer.)

And yet we know that:

"War against a foreign country only happens when the moneyed classes think they are going to profit from it." George Orwell

So from Jupiterian Trump's recent statements of belligerence, it appears that someone has advised the billionaire-wanna-be of this potential for profit and profit is all he cares about.

Now on the topic of the Civil War here's an excerpt from a previous post with a link to the rest added, below:

To persuade the South to secede from the union, Illuminized Sionist-Rosicrucian Freemasons used the Knights of the Golden Circle (member: John Wilkes Booth) which had been formed in 1854 by George Bickley with the objective of spreading racial tension; its military arm was the Ku Klux Klan. Meanwhile, Jesse James stole gold from banks and buried it to fund the war (nearly $7 billion!)

The states that seceded would be united in the Confederate States of America with each eventually becoming like an independent country. Abraham Lincoln (inaugurated March 4, 1861) told the American people that, "combinations too powerful to be suppressed by the ordinary machinery of peacetime government had assumed control of various southern states."

America and the entire world are now in the grip of the 'hidden hands' of wealthy men who plan another World War and who had a major part in putting hothead Mars-Rising Trump in the White House for such a purpose. Read the rest if you dare or if you simply care about the world's direction: Civil War Apr 12, 1861: Midpoint Pictures and Hidden Hands.

Have you checked out Bob Corker's Wikipedia profile? Senator Corker was born August 24, 1952 in Orangeburg, SC. His family moved to Tennessee when he was 11 years old. A quick peek at the 24 hours of his birth date (sans birth hour) shows Sun from 00 to 1Virgo+ and Moon ranging from 10 to 22 Libra. As you see, The Great American Eclipse of August 21, 2017 eclipsed Corker's natal Sun which conjoins royal Regulus (success if revenge is avoided) and the natal Ascendant of Donald Trump. Will Bob Corker run for president? His Libra Moon is among the 2nd house Libra planets of Mr. Trump (Neptune-Chiron-Jupiter from 5 to 18 Libra).

The Earth-Air blend of Sun Virgo-Moon Libra denotes a practical idealist and a courteous intellectual (Corker is said to be the most intelligent man in the US Senate). Humorous, considerate, and rational, Bob Corker will be sorely missed in the Senate when or if he fails to run for re-election, as he has stated he would not. A senator and Republican who is ready to forgive others because he recognizes his own fallibility will not be easy to replace with a similar model--actually, impossible to replace from the looks of things for this personality blend shows that he has respect for the dignity of others, excellent reasoning power, and a "civilized concern for the wellbeing of all." And though the senator may at times seem detached, he appreciates both art and science, and has "the ability to cooperate with others for a common cause."

Senator Corker's daily mantra may be: "the unexamined life is not worth living." (Sun Sign-Moon Sign, Charles and Suzi Harvey). Of course as we know, this viewpoint is diametrically opposed to the imbecilic profit-above-all mindset of Donald Trump who thinks he's never made a mistake and has nothing to apologize for.

The Prenatal Eclipse (PE) of Bob Corker @28Leo (conjunct The Great American Eclipse degree!) is in the 8 South Saros Series and manifested four days prior to his birth so that his PE is also his Syzygy Moon (last lunation prior to birth) making him something of an 'eclipse baby'. The themes of 8 South, which last occurred in 2006, are: separation, loss, to be finished with something and feel sad; physical injury possible due to over-strain (Brady's Predictive Astrology).

Yes, it must be quite a strain having to deal with a red-faced, angry, egotistical Mr. Trump who seems to be attempting to "start World War III" but who can't seem to 'best' Senator Corker whose IQ is probably way above his. I wouldn't want to deal with Trump, would you?