July 8, 2020: Yes, the following bi-wheel of natal horoscopes, Donald's (1946) with Fred Trump's (1905) looks messy thanks to my scribbled notes but so was their relationship as we're learning from Mary Trump's soon-to-be-released book (July 14th). The most intense and telling planetary aspect between them has to be Fred's Pluto (*22Gem40 Rx) conjunct little son Donnie's tender Sun (ego), a cosmic picture of the crushing pressure of a father against a son born on an eclipse (8Gem48; 2 Old North) that 'eclipsed' his Papa's natal Jupiter Rx @6Gem05, with its 2 Old North themes that include "unfortunate news" (Brady).

Plus, as you know, Mercury-ruled Gemini is not the most stable of signs and duplicity often comes along with it if the native chooses or is compelled so - Gemini the trader, dealer, liar, and thief.

So hopefully enlarging the image will make it readable for you. Highlighted in green are Fred's placements (no birth time known so I used Donald's alleged time of 10:54 am est, not edt) and Donald's are in orange. Expectably, bullying turns up along with deceit, overpowering, enemy status, star-crossed, conflicting values, underhandedness, threats, emotional and physical damage, and more. Some trines between them may have helped their relationship, one wants to assume, but not enough for me to include them here because after all, we see Fred's (and mother Mary's) handiwork when we watch and suffer from Donald Trump's immature, vengeful, bullying, gross, depraved, insulting, deceitful, pathetic behavior. Poor ole fella.

As you see, an additional note is included in the center of the bi-wheel with a big 'if' attached: if Fred's Moon opposed his Venus across the Virgo-Pisces victim-savior axis. See what you think about its potentials which a read of Mary Trump's book may helpfully illuminate. Also highlighted in green is the Sabian Symbol for Fred's Sun and Mercury conjunct Donald's Jupiter Stationary: "18 libra": "Two Men Placed Under Arrest." That's quite a major pile-up upon one little (very descriptive) degree especially for Donald's boundary-crossing Jupiter (in Libra: "It's not fair!" his constant refrain). By which I refer to the Jupiterian title of Mary Trump's book: "Too Much and Never Enough: How My Family Created the World's Most Dangerous Man." I lay 'the most dangerous' in large part upon the doorstep of Donald's natal midpoint picture of rage, fury, brutality, destruction, cruelty, and the death of many people: Mars-Saturn = Pluto: 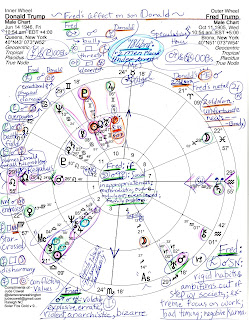 *22Gemini also happens to be the position of US natal Mars (which squares US natal Neptune). The Mars-Sun-Pluto combination is volatile to say the least and must be involved with Donald's obsession with the military and his problems in relation to such topics (exs: "Cadet Bone Spurs"; sent away to military reform school; desire for his very own military parade; using military forces for police actions, etc).

Good summary of the key relationship in this family from hell. Pisces Moon for Fred seems most unlikely — in combination with Sun - Mercury in Libra, it seems more like a poet. On the other hand, an aggressive Aries Moon — a full moon, like the Donald, both air / fire — seems eminently plausible.
One more astro connection that I didn’t see in your write-up: the actual sign reversal of the crucial lyin’-SOS Mercury - Neptune square, with Fred’s Sun thrown in for extra fulfillment measure (as you pointed out). The Cancer side of it emphasizes the “deep” family pattern of deception / obfuscation.
(Whenever I contemplate the “character” of either of these characters or the large cast of enablers, I’m reminded of a scene from “Indiana Jones and the Last Crusade.” The ancient Templar comments drily: “He chose . . . poorly.” Then again there’s the Biblical caution against gaining the world and losing one’s soul, which could also be applied to America’s destiny.)

Make sure you have the record player on at night,