Let's Not Blame Jupiter and Saturn for Men's Ill-Conceived Schemes

July 6, 2020: In case you haven't heard, the crises now enveloping the globe (pandemic-financial-social-environmental) will culminate on a draconian planning level in January 2021 at Davos, Switzerland as 'the reason for their treason' becomes more clear to the world at the Agenda 2021 Reset Summit. For years here on SO'W I've fussed over the power elite (and their hidden enablers) use of the Hegelian Dialect for just such devilishness as this: create problems then "solve" them the way you intended to all along.

And now that 2019 has morphed into 2020 with the corona virus putting the brakes on most human activities, depopulating nations, and rearranging society's deck chairs, we find that the Hegelian model where "oh please form a new world order now because global problems are simply Too Large for little nations states to handle" will become the 'order' of the day as 2021 begins if not before. After all, one reason globalism was forced upon us was so that future collapses would be worldwide and would figure into their Great Plan for totalitarian domination.

Now again, here is the Jupiter-Pluto Conjunction of November 12, 2020 for your consideration with the wealthy, manipulative Jupiter-Pluto duo representing such groups as 'developers and implementers of large-scale projects' - large projects such a global agendas: 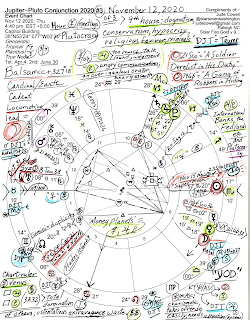 Karmic Saturn The Lord of Time

So will the Great Conjunction in Air of societal planets Jupiter and Saturn time the establishment of the agenda's 'new order'? Cosmically, yes, their 20-year cycle does represent an 'out with the old in with the new' paradigm but obviously conspirators such Davos planners and other social tinkerers (and their astrologers!) have known the 'new order' conjunction was coming in December 2020 and will use it to hide behind what has been their Hegelian-style agenda to "reset" the world order along with boosts from the other Major Conjunctions of 2020 and the new cycles of activity they signify.

Yet as a Saturnian astrologer I must note how easy it is and will be for any astrologer to fall into the trap of laying Agenda 2021's implementation and negative outcomes at the feet of Jupiter and Saturn, who benevolently act, after all, as the 'Flywheel of the Universe' via their expansion-restriction qualities that keep the planets in our Solar System orbiting within their courses.

And this always reminds me of Psalm 23:4, KJV, which illustrates the assurance that in spite of all that depraved men can do upon this Earth, our Creator is The One in charge (my italics added for clarity):

"Yea, though I walk through the valley of the shadow of death, I will fear no evil, for Thou art with me; Thy rod (Saturn) and Thy staff (Jupiter) they comfort me."