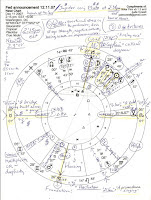 If all goes as scheduled Tuesday, the Fed will announce its decision about reducing interest rates--or not.

Not so odd though if you consider all the Middle Easterners in process of purchasing American companies...East buys West, it seems. Guess the destruction of The Tower on 9/11/01 is yielding benefits as planned--at least for the haves of the world who love to orchestrate the "big picture."

The transiting Saturn/Neptune midpoint (loss) is now at critical degree, 29Sco07, and just before reaching the degree I always relate to the military industrial complex (and thus to Cheney's Iraq occupation) of "1Sag": "A Grand Army of the Republic campfire."

As to the Fed announcement chart, we see the Jupiter/Pluto conj snugged about the chart's 9th cusp of foreign enemies and interests; Sun 19Sag22 in 8th house of shared resources and debt, along with Mercury, the Messenger, at 16Sag07. Mercury is conjunct Sunday's New Moon, so we have:

Sun is conj the Fed's natal Venus (values; money; relationships) which was at 19Sag03 on Dec 23, 1913 when the Fed became law to save America's bacon (or so they said. They've been 'privatized' from the start, not governmental.)

Sun to n Venus highlights negotiations and relationships when important alliances and partnerships may be formed.

The Uranus/SN combo indicates upsets through revolution and war, and changing social and technological conditions which are disruptive.

By 1917, Pres. Woodrow Wilson declared war in order to "end all war" and "make the world safe for democracy" which sounds nauseatingly familiar, doesn't it? (And it isn't that "they" never learn--it's that WE never do.)

So what of the Jupiter-Pluto conjunction?

Star IQ says this Great Conjunction of opinionated Jupiter and intense, powerful Pluto indicates extreme beliefs bringing debates with judgement of others being due to exaggerated fears. It's time to give up outmoded ideas, dreams, and false expectations (such as houses built on subprime loans?) to make room for realistic plans to fulfill our deepest desires.

Or perhaps the deepest desires of the haves of our shakey "ownership society"?

StarIQ also has an informative article by Rick Gover on Pluto and the Fed which mentions a cornucopia...and here's today's degree for asteroid, Cupido, keywords: corporations; The Family...

"24Aries": "An open window and a net curtain blowing into a cornucopia"--Cupido is in the behind-the-scenes, karmic 12th house of the announcement chart--and pulling hidden strings, no doubt. And Cupido is now conj Bush's n MC!

Chart-ruler Venus is in 7th house of partnerships and legal affairs ('relationships' again) so money is all over this chart--click to enlarge and you'll see for yourself. She's in big business-loving Scorpio, too.

Even the relational Sun-Moon midpoint is highlighted at a World Point (00Cap55), a spot where tr Pluto will soon be visiting: new perspectives required and a critical time of development. Pluto will also conj the Moon-Mercury midpoint of this chart...

Moon/Mercury = Pluto: persuasion or being persuaded; the force of thought; a reorientation of thinking caused by special events or destined experiences; tragic realizations (all midpoint pics: Tyl and/or Ebertin.)

Rich man Jupiter rules 8th and 9th houses, and there are critical degrees (20Can/Cap) at MC/IC, the WHY and HOW Points of the chart. Jupiter applies to conj with the Sun (9A02); chart-ruler Venus' three applying aspects (how things will "go" for the rate decrease or non-decrease announcement) are:

3. Venus square Chiron (4A39)...sounds like fairly smooth sailing but ends with a square indicating obstacles and blockages by a 10th house Chiron in AQ. Will America's wounded (Chiron) reputation and status in the world (10th house) gum up the works? Or will weasley values and rampant corruption in the financial system sink the deal?

Contacts between Venus and Chiron show stress in relational values with their square indicating maximum stress in finding a permanent value system. The world could use one of those...esp America, imho.

Hypothetical planet, Apollon forms a YOD ('Finger of God' = special purpose or task; crisis) by sextiling the Jup-Pluto pair. The YOD is pointing to the Part of Fortuna of this chart--28Tau08, in 1st house. The Jup-Pluto duo trine the ASC (2:15 pm--the announcement) so they are helping things along.

Saturn-Uranus = old vs new; tradition vs progress; the need to fight for gains; violence; tension; intervention in the destiny of others. This grumpy combo of planets is linked with the Middle East, esp with Israel and Palestine.

Saturn and Uranus' cycle of appr 45 years will soon culminate in opposition from their last Conjunction/s of 1988 at 28/29 Sag which is the Jupiter-Pluto Conjunction's degree NOW...

Jup/Pluto = Uranus: fanatical striving for improvements; quick exploitation of every situation; sudden reform; an adjustment to new circumstances; intense application of resources to establish a new perspective; overturning the tables; getting back on track or finding a better one.

Saturn/Uranus = Jupiter: resolution of tensions comes rewardingly from without; a sudden turn of destiny; losses; damage to buildings.

But Back to Apollon:

Apollon's keywords are: commerce and trade; greatest expansion and success.


And there's an asteroid conj the Jup/Pluto conj: Hopi, whose keywords are:

awareness of oppression and prejudice; ambush, including psychological ambush. Funny--I always think of high hopin' Bush when I see Hopi--and he did rather ambush the White House.

pos: extraordinary skill in enlisting every resource of the world for the exaltation of self and the consummation of its ambitions;

On a lighter note: I've published a new/old image at Dreamyfish Art, if you'd like to see along with a link to an AP article about new deep water coral that's just been discovered!
Posted by Jude Cowell at 10:52 PM

Hey Jude,
Love your website and read it religiously. Since I have natal Jupiter at 28 Sag...I've wondered what the current Jupiter/Pluto hoopla will mean for me.
While searching the Internet I came across this timely piece you and others may enjoy reading.
http://www.astrobarry.com/2007/dec807.php
Patty

Thanks a bunch, patty! Whoa--you & Al Gore with Pluto joining in with your Jupiter Returns--let me know what happens (power and success?!)