The Life of Nostradamus + 1999's King of Alarm Eclipse

It is my opinion that the world hasn't been the same since the Solar Eclipse of August 11, 1999 with its stressful Grand Cross hung upon the mid-degrees of the Fixed signs of Taurus (ox), Leo (lion), Scorpio (eagle), and Aquarius (angel), and that this relates to Revelation's prophecy of the angels letting go the winds of war and strife.

Now you don't have to agree with my Biblical view of the Eclipse, but you can't deny that the world is experiencing increasing numbers of wars and strife, can you?

This difficult Solar Eclipse in the 1 North Series was predicted hundreds of years ago by physician, seer, and astrologer Michel de Nostradame, known in modern times as Nostradamus, and it has a few nicknames you've heard before: the Mother of All Eclipses, King of Alarm Eclipse, King of Terror Eclipse, and Nostradamus' Eclipse. Some have said (astrologer Nicholas Campion, if memory serves) that there is a difficult financial component to the Eclipse as well.

Well, considering the attacks of 9/11/01 on the World Trade Center and the gold in the Tower's basement along with Deustche Bank's offices there (and other financial institutions, if memory serves), a financial component seems probable since that's what has been rapidly changing for the worse in the New Millennium (except for the power elite - they're cornering the world's wealth. Do you know it? Can you feel it?)

Yes, financial collapse has issued forth like ripples on a pond from September 11, 2001 to 2008/09's financial crisis - and this reluctant astrologer suspects that the ill effects of greed, corruption, and the 'big plans for world domination' of the select few are continuing to reverberate with excessive war costs destroying the American economy as the US military industrial complex grinds down the dreams of future generations while "collaterally" killing and maiming millions of innocent people along with those who stand up to it.

Written during the Bush-Cheney terms in office, here's my post on the King of Alarm Eclipse with chart image, if you'd care to view. Do notice the Images for Integration for Sun Leo-Moon Leo of this Eclipse...especially the second one about the 'new king.'

Here's a site with the most complete story on the life of Nostradamus that I've ever found, down to the French-with-English-translation of his epitaph.

Now in case the above-linked image of the 8.11.99 Eclipse chart doesn't display well enough for your squinty peepers, here it is again - but you may want to click the link above to read my notes on the Eclipse.

And click the image below to enlarge for viewing some basic info added to the chart: 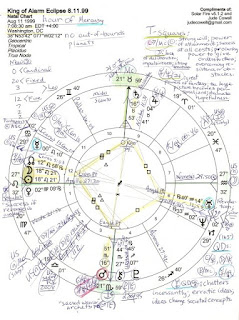 Or, if you prefer for 9/11's Neptune: '7AQ'..."A Child Born of an Eggshell"...'EMERGENCE OF GLOBAL MAN for the New Age' (Rudyar); America's primary White Lodge, akaThe White House, has a certain room shaped like an egg: the Oval Office. Synchronicity at play once again?

Then there's King of Alarm Eclipse of August 1999, which was written in January 2008 and contains...well, you'll just have to see!

Note on Commenting: all pertinent comments are welcomed here (although moderated) because we're all in this together, m'peops. And one little planet Earth is all any of us have got.
Posted by Jude Cowell at 1:48 AM

Email ThisBlogThis!Share to TwitterShare to FacebookShare to Pinterest
Political Astrology,Astrology,Politics 1999 Solar Eclipse, 9/11, King of Alarm Eclipse, King of Terror Eclipse, the Fed cuts rates Sep 18 2007, The Life of Nostradamus, the Mother of All Eclipses