Warpaths and a Joyride to Hades

And in front of military veterans, too!

President Barack Obama sounds predictably Bush-like as he stumps on behalf of war to an allegedly willing audience, while evoking 9/11 to justify US imperialism against the whole world - but most especially against the Middle East where the oil lies.

Did I hear you whisper, hope, change...or...audacity?

Once again I assert that changing presidents in honor of the Oval Office is a baton-passing exercise. It has nothing to do with deserting a previous agenda. It has everything to do with continuing an agenda, though perhaps under a different guise...this time, a suave one. 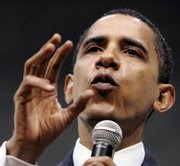 You know the old saw: would you buy a new or used car from this man? Well, it seems you and I already have, but unbeknownst to many, George and Dick were huddled together in the rumble seat, grinning like satanists on a joyride to Hades.