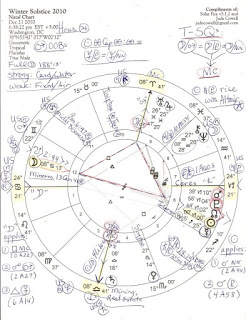 Fresh from the December 21, 2010 Lunar Eclipse, this year's Winter Solstice Moon in 12th house clocks in at 8Can13 as the Sun reaches 00Cap00:00. In Washington DC on Dec 21, 2010, the annual solar event occurs at 6:38:22 pm est with 24Can21 rising which brings up America's natal Mercury Rx opposing natal Pluto 27Cap33 Rx (US planets are notated outside the chart; please click to enlarge.)

It's an Hour of Jupiter 25Pis20 conjunct Uranus 26Pis47, both now moving directly and in the Winter Solstice's 9th house. Chart-ruler Moon applies to three aspects:

Therefore, at least some difficult conditions at the start of Winter season 2010 may improve before Spring 2011 - I hope so!

Perhaps the Moon/South Node contact in 12th house should be mentioned for it shows separations, bad timing due to difficult circumstances (ex: being too late for a job interview because car is too expensive to repair and the bus runs late, etc), isolation that leads to depression, and a feeling of 'being alone against the world'. Yet with concentrated effort and strength of character, adversity will be met with courage and determination - plow on through, m'peops!

But yes, Moon/SN points to karmic conditions (past behaviors that no longer bring good results) as does the Moon's position in the karmic 12th house for the Winter season. Hospitals and other large institutions experience fluctuating conditions with Moon in 12th house, and certainly chronic health issues of the people (Moon) are triggered. US natal Mars conjoins 12th cusp 22Gem10 showing a karmic undoing relating to males in general, but specifically to police and military forces; plus, warring Mars rules Midheaven, the Aspiration Point of any chart.

As you see, 8th house of Debt and Shared Resources contains the ongoing, when-will-it-ever-end duo of wounding Chiron and nebulous Neptune still sitting astride US natal Moon (we-the-people) so we may expect the Neptunian onslaught of fraud, floods, toxins, homelessness, debts, and mortgage issues to continue into 2011.

In 4th house, the Foundation of the chart, we see Saturn 16Lib08 in process of our US Saturn Return (14Lib48) when chickens come home to roost and accountability must be faced. Perhaps bank managers (Saturn) will be facing hard questions about their robo-signing habits and other legal abnormalities in the foreclosure process. Plus, in 4th house, Saturn may indicate mining accidents or issues, and real estate delays and losses...Saturnian conditions in the homeland with Saturn ruling 8th house (co-ruled by disruptive Uranus bwo Aquarius.)

Yet Venus 14Sco27 (sign of Big Business and Surveillance) is in 4th house as well and conjoins US Inaugural Descendant showing foreign or hidden evaluations and relationships which (since chart-ruler Moon trines Venus) may bring some relief to our housing woes (Venus rules Ic) - or bring us the 'slippery slope' a trine may so easily provide.

Mercury 25Sag25 Rx in 6th house is the ruler (dispositor) of US natal Mars and may show preparations for troop movements (6th house = police and military service as well as Health and Work.)

Sun 00Cap00:00 is apex in two midpoint combinations of energies:

Mercury/Pluto = Sun: a persuasive speaker; communication skills; keen observations; prudence and vision; a desire for recognition; championing an idea or attitude that prevails; determination to use force to obtain or locate information; enhanced authority or prestige among people who control important information or news.

Mercury/NN = Sun: added focus on the effectiveness and importance of the message presented; well-coordinated personal ventures; a life philosophy; urge to exchange ideas with others.

Now obviously, the Mercury/NN combo has to do with meetings where discussions take place, also with discussions involving young people, reporters, traders, etc - any and all mercurial implications are being encountered. But a note may be of interest concerning the Mercury/Pluto combo and Michael Munkasey (Midpoints: Unleashing the Power of the Planets) is very helpful on the topic - since Mercury/Pluto points toward the Winter Solstice Sun, and America's natal Mercury/Pluto opposition is emphasized by appearing on the ASC/DESC axis of this horoscope.

Ebertin gives Mercury/Pluto as: persons guilty of fraudulent representation or misrepresentation in speaking or writing; plagiarists or demagogues; sharp critics, and crafty people. Overestimation of self, propagandists, and spies are also indicated by Mercury/Pluto, and their opposition shows a condition where researchers work on secret projects and dangerous information must be dealt with.

Sun/Pluto = NN: fateful associations; separations; a lack of adaptability (in Washington?!!); meeting the powerful; very special new attachments; other people inspire development of a stronger will or purpose.

Mercury/Mars = NN: quarrels within a community; the realization of thoughts in tandem with others; expressing or teaching competitive practices; acquaintances who have an irritating style of speech.

So how about the T-Squares formed, all with the Moon as one 'leg'? Moon/Mars appears on Mc, the others opposite Mc:

Moon/Mars = Mc: a forceful and purposeful nature (possibly a woman); upright behavior; spiritual relationships; self-promotion; getting things off the ground.

Moon/Pluto = Mc: one-sided emotional intensity; remaining alone and never acting in accord with others; a highly strained emotional life; successfully handling the moods of others.

Moon/NN = Mc: success through allying with those who share your goals; being recognized by influential people; soul unions or emotionally intense relationships.

Well, Mars 10Cap39 is out-of-bounds so who knows what he's up to as he continues opposing by transit our nation's Cancerian planets (Venus, Jupiter, Sun in the 3 - 14Cancer degree range); next Mars will oppose natal Sun which can be an ego-bruising time for the President (Sun) and thus the nation when complete success isn't possible. There may even be a loss of integrity during this period for the opinions and actions of others do not support his leadership (we don't need a horoscope to tell us this.)

Actually, now that I think about it, this out-of-bounds Mars (acting on his own and as a troublemaker), exalted in Capricorn and able to focus his energies with great efficiency, may just be the primary actor who runs away with the entire Winter Solstice 2010 horoscope as Mars nears opposition to America's natal Mercury (plans and ideas are dismissed out of hand), then conjoins US natal Pluto, a time when something forceful of a karmic nature may come along and simply - or seemingly - have to be done.

A Personal Note: to the several readers who've expressed a desire to read my American Empire: When Jupiter Bowed to the Sun article now published in the Fall 2010 issue of Julie Demboski's Fall Eclipse e-zine: Julie (with her excellent editor's cap on) and I worked together like two cobblers at a virtual table through the magic of email for corrections and additions; therefore, I do not have a final copy of the article as-published and cannot send it out.

The final copy is in the e-zine!

When it is my legal right to publish the article in 6 months, it will most probably (given my previous and inexplicable averseness to making an income bwo Astrology!) be complimentary. Until then, I shall stand by the publishing arrangement made between Julie Demboski and myself and do thank my readers most heartily for their kind interest which I hope they will follow up on, for the Fall 2010 issue of Eclipse contains several great articles on a variety of topics - as do its other issues, I guarantee! jc