When China's President Hu Jintao arrives in Washington DC on Tuesday evening January 18, 2011, the Moon's darkened phase will be under way with the Full Moon 29Can27 perfecting Wednesday Jan 19th at 4:21:20 pm est in Washington.

The first Full Moon after a Solar Eclipse (1.4.11) is important as the culmination or fulfillment stage of seeds planted at the New Moon (prior eclipse.) Rising 19Can38 is the degree of July 11, 2010's Solar Eclipse in the 12 South Series:

Considering the longstanding and alleged tussle between America and China (our biggest loan-officer) over dollar-yuan issues and trade imbalances, let us hope such success will resound to the benefit of China's and America's people, and not just to the benefit of NWO promoters who desire a global currency. And yes, Fixed Star Castor rises as well with keywords: sudden loss or fame; murder. (A. Louis.)

(The sinister influence of Castor is implicated in the end-of-December murder of bio-weapons expert John P. Wheeler along with the critical-degreed Dec 21, 2010 Lunar Eclipse 29Gem32.)

At Midheaven (The Goal) 2Ari25 in the Jan 19th Full Moon chart (shown below) is Jupiter at crisis degree 29Pis30 (so near World Point 00Aries and US natal Ic) indicating critical financial issues to be discussed by China, President Obama, and US business leaders including, one assumes, Mr. Bernanke and other Fed officials. Will the US Chamber of Commerce and US Treasury Department bigwigs willingly sit this one out? Impossible especially considering the Sabian Symbol for the full Moon's Sun...

'30Cap' = "A Secret Meeting of Men Responsible for Executive Decision in World Affairs"...Keynote: The power to assume responsibility for crucial choices arrived at after mature discussion with those who share this power." EXECUTIVE POWER. (An Astrological Mandala, Dane Rudhyar, who relates this symbol to "inner government", "occult hierarchy", and the "White Lodge"...aka, the White House. What US government the public observes being 'conducted' is PR window dressing to hide the real deals going on behind closed doors, m'peops.)

Add to that, Mercury/Neptune = Mars 3AQ05: acting according to deliberation and experience; inspired planning pays off; realization of plans. (This Mars conjoins US Inaugural 2009's 10th house Jupiter = expansive or exaggerated plans; giving others more credit than they deserve; actions of others expand one's potential for development...further extension of credit as our debt ceiling needs raising?)

The persuasive, spying, propaganda-touting pair of Mercury and Pluto are on the Nodal axis of fated encounters which creates a midpoint picture:

Mercury/Pluto = NN: a desire to dominate; lording it over others.

The current Solar Eclipse Series (13N = groups, associations; breaking an already existing bond leads to joint achievement) which manifested on January 4, 2011 @ 13Cap38 opposes US natal Sun (the leader in a mundane chart) and spotlights President Hu Jintao's criticism of US economic policy as mentioned in the above-linked article with the recent Federal Reserve decision to inject $600 billion into our economy at the expense of other countries' exports (as the media's popular line goes.)

The Jan 19th Full Moon and the 11S Solar Eclipse are in a critical/crisis 29th degree. Here is the Full Moon horoscope with a few details notated on the chart; click image to enlarge and read my scribbles: 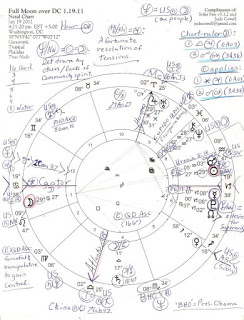 It's an Hour of Mars which indicates action and points to Jan 2009's Inaugural Jupiter as noted above and which affects the 10th house of Public Status for the Obama administration and thus for America. The Full Moon's Mars 3AQ05 is also a transit to China's natal Moon (the people), a time of anger and frustration when the pace of life increases and domestic activities are of greatest concern.

An additional midpoint picture of note which relates to mercurial journeys, negotiations, and trade: Saturn/Uranus = Mercury: the ability to hit back under provocation; making great demands; necessary changes; organizing resistance; the act of separation. (Saturn = tradition, the past; Uranus = progress, the future with the tension and energy focused on Mercury, the Messenger.)

How about a list of prominent US-China contacts between our natal horoscopes? Here I'm using China's national chart for Oct 1, 1949 3:15 pm CCT Beijing (from historical record) with the Sibly version of our US natal chart (July 4, 1776 5:10 pm LMT Philadelphia, PA):

US Venus and Jupiter (3 & 6 Can) conjunct China's n Uranus (Venus/Uranus = extravagance with money, separation; Jupiter/Uranus = horizons broadened or altered, breakthroughs, political affiliations and independence highlighted; US natal South Node conj China's n Moon 3AQ11 and ASC 5AQ57 shows the US habit of falling back on the resources of China for support, and the hard work of the Chinese people; US natal Saturn 14Lib48 has China's n Mercury 13Lib10 and Neptune 14Lib39 upon it.

Mercury to Saturn shows advice being sought, serious discussions between our two nations, and on another level, our restricted communications. Neptune to Saturn emphasizes communism-socialism concerns; US n Neptune 22Vir25 has China's natal Saturn nearby @ 13Vir09, a double indication of shared Saturn/Neptune motifs such as secret government, and idealism which can be highly misguided, strange, and grim for the masses (Neptune.)

(BTW: I am compelled to add that on Sept 11, 2001, China's Mercury and Neptune were conjoined by transiting Mercury - airplanes - which was rising and crashing into the Twin Towers on that morning; also, tr Neptune conjoined China's natal ASC 5AQ57, a mysterious influence concerning one's self-image in the world. Interesting, yes?)

Other factors in the Jan 19th Full Moon chart and our nations' national horoscopes are of interest but it's time to close this post with two of the Images for Integration for Wednesday afternoon's Full Moon chart which imprints its mark upon the January 2011 visit to the US by Hu Jintao:

"A priest blesses his family before setting off on a pilgrimage...A politician kisses a baby without pretence." (Sun Sign-Moon Sign, Chas & Suzi Harvey.)

Now it seems the first Image refers to President Hu Jintao's historic journey to the White House under the rays of a critical-degreed Full Moon and 'pilgrimmage' may refer to the symbolism of sun-worshiping that goes on among global leaders intent on instituting one-world-government.

The second Image sounds all but impossible to imagine because pretence seems to be a major requirement for the practice of politics....unless we factor in a certain Sabian Symbol for '12Can' (conjunct US natal Sun 13/14 Can): "A Chinese Woman Nursing a Baby with a Message."

How easy it will be for both presidents to deliver and hear this week's particular financial messages and exchanges we may never fully know until it's too late and the selling-out of America and her citizens has been ultimately and completely accomplished.

Midpoint pictures: Tyl; Ebertin; any, all, or none may apply.
Posted by Jude Cowell at 8:51 AM