In an attempt to create gravitas for the political aspirations the high talker may or may not have, Newt Gingrich is leaning toward announcing his presidential bid from Independence Hall, Philadelphia, in late May.

Perhaps Mr. Gingrich is subtly trying to link himself to Founder Benjamin Franklin whose portrait on the older 100 dollar bill shows Independence Hall clock at 2:22 (a sly clue from trickster Franklin as to the real birth time of America?.)

Whether his enigmatic smile toward Independence Hall clock indicates 2:22 am or pm, I do not know.

But if America's birth is timed by the Declaration of Independence's first copy coming off the press at such an early hour as that (as I've read it did, with Thomas Jefferson overseeing its printing with Mr. Dunlap), we may have a Scorpio Rising nation. I have stated in the past that this chart 'works' for spying agency issues and events and for Big Business (Scorpio, 8th house) concerns.

Here I shall post an image of the Scorpio Rising chart as a speculative natal horoscope for the United States of America (2:22 pm) so you can see the Scorpio Ascendant which makes Mars (square Neptune) the chart-ruler; this matches our surveillance and warring tendencies with sub-ruler Pluto adding zeal, spying obsessions, great wealth, and a secret, distant (Pluto is out-of-bounds) and ultimate 'boss' or cabal leading our national brew. (My guess is England since Pluto is in Capricorn, sign of the Old Country and sign of the UK's natal Sun, Jan 1, 1801.)

Several factors change with this natal chart, of course: house positions and rulers, cusps, Osiris at Midheaven, and more. If you're familiar with the most-often used Sibly version, the differences are easy to spot. Transiting Midas 8Gem+ currently sits upon our natal Uranus in any version of the US natal chart; this chart shows Midas conjoining the 8th cusp of High Finance and Debt.

Naturally, the degree of the Moon (we-the-people) changes. At 25AQ29 we have a different Sabian Symbol than in the Sibly version (5:10 pm LMT) with its 27AQ10 Moon.

'26AQ' = "A Garage Man Testing a Car's Battery with a Hydrometer"...MENTAL EFFICIENCY.

Keynote: Skill in applying knowledge of natural laws to the solution of everyday problems resulting from life in our technological society. (An Astrological Mandala, Dane Rudhyar.)

Natal Sun remains at '14Cancer' = "A Very Old Man Facing a Vast Dark Space to the Northeast"...PERMANENCE IN TRUTH.

(My suspicion is that the Sun's Sabian Symbol refers in part to the US Constitution being based on that of the Iroquois Nation of tribes which were spread across the northeast.)

So you may wish to click the chart image to enlarge for a few more notes; you'll see that I neglected to add our pesky Sun/Saturn square (lower left, the fatal flaw in our Libran Judicial System); interestingly, you'll see (upper right) that a new midpoint picture is formed with the Sun (the leader; leadership) which is different from other versions of the US natal chart and, imho, ably describes the way the leadership of this nation goes about doing things. 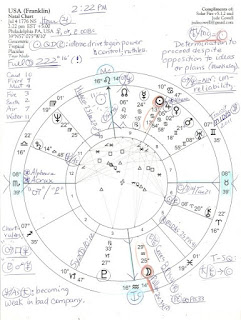 An Additional Astro-Note: as you may know, the '9Sco' ASC in the US horoscope pictured above conjoins the natal Neptune of President Barack Obama (August 4, 1961 7:24 pm AHST Honolulu, Hawaii) with Neptune/ASC indicating potentials for: compassion and understanding, acting ability, a lack of resistance, acting as a willing tool for others' selfish purposes (Wall Street? the Bilderberg Group? the Health Insurance Industry? All of the them?), illusions and deceptions, cheating or seducing others, insincerity, disappointment and disillusion, an inability to retain one's place in the world, and/or abuse or betrayal of confidence (Ebertin.) I leave it to you to decide if any of the potentials apply to the relationship between President Obama and the place we're accustomed to calling America.

Blog Note: starting Friday it's another weekend spree for me, this time in the Atlanta area (where Gingrich will set up his campaign headquarters if needed); I will be blogging here again by Monday! And you know my heart remains in Madison, Wisconsin. Recall the Republicans! Wishing a good weekend to all, jc
Posted by Jude Cowell at 9:52 AM