With Mercury's current retrograde condition in Mars-ruled Aries, a review of Paul Ryan, poster boy for austerity cuts, and his "Roadmap to America's Future" may be in order.

It amazes me that any self-interested American can believe the austerity plans of the GOP as touted by Paul Ryan will lead to anything but complete government take-over by fascist elements - their goal perhaps, but not the goal of average Americans who'd like to raise their families in peace and freedom - as other families in other nations also want.

Perhaps you disagree. If so, please leave a courteous comment here for I'd like to know how placing budget problems on the backs of the little man makes any sense at all - unless complete collapse of a society is the ultimate aim - while it's the rich 1% - 2% who have the funds that could keep America in business! Obviously, the plan is to break the little man's back and thereby exercise population control upon the weaker and weakest while creating a nation of serfs begging for crumbs from the totalitarian table of a morally deformed power elite.

Guess America's Secondary Progressed Full Moon (@ 4Vir10 opposite US Sec Sun 4Pis10) of December 24, 2008 did signal something important after all: that we as a nation had expanded as far as we could in the world and the time to retract financially had come - which includes the Pentagon's quixotic notions about world domination, aka, the new world order.

And of course, Financial Collapse 2008 was in its full regalia by the time of our nation's Sec Full Moon (or, SP Full Moon, if you prefer; I use 'Sec' to distinguish between Minor and Tertiary Progressions)...synchronicity in action.

Click the link above to read my older post on the US Sec Full Moon, chart image included, but I shall post the horoscope here as well (as is, no edits): 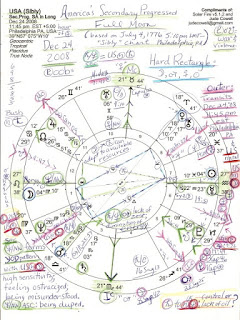 As you see, there is a Hard Rectangle pattern formed between the opposing Moon and Sun and opposing Venus and Mars. The Hard Rectangle was given its name by Charles Jayne and it suggests that the oppositions are more pressured to activate reconciliation because of the subtle, indirect pressures of the semi-squares and sesqui-squares involved.

A greater application of will to accomplish balance and harmony is indicated yet the stand-offs can spark further antagonism (Washington's stock in trade) and a lack of compromise (now a dirty word on Capitol Hill: President Obama has invited certain vipers to the White House this morning to talk of ways to keep the US government open and running past April 8th - or, to rehearse the script they will all be following.) The antagonism and lack of compromise between our alleged 'two' parties act as handy diversionary tactics to keep the people divided and conquered.

However, the dynamic tension within a Hard Rectangle pattern can add a dose of strength and purpose when its planetary energies are well-managed. Venus here is ruled by Mars and Mars is ruled by Venus in a mutual reception which may not have been enough to counter the victim/savior conditions of the Moon (we-the-people) in critical, hard-working Virgo while the Sun (the leader; leadership) remains in elusive, often deceptive, Pisces, sign of many a military general.


Further reading: a natal chart astro-peek at Paul Ryan.
Posted by Jude Cowell at 9:43 AM