METEOR SHOWER: The Perseid meteor shower is underway. International observers are now reporting more than 20 meteors per hour as Earth passes through a stream of debris from Comet Swift-Tuttle. Forecasters expect the shower to peak on the night of Aug 12-13. The best time to look is during the hours before dawn on Saturday morning, August 13th, when the glaring Moon is relatively low and meteor rates are highest.

WATCH OUT FOR THE SPACE STATION, TOO: Consider it a cosmic coincidence. During the peak of the Perseid meteor shower, the International Space Station will fly over many US towns and cities.

The behemoth spacecraft is easy to see if you know when to look. Check SpaceWeather.com's Simple Satellite Tracker for flyby times. #

Plus, you may wish to check out a little Astrology on Perseus the Prince, the archetype of the constellation associated with the annual Perseid meteor shower.

And there's another post that concerns Perseus and the stars linked to the natal chart of WikiLeaks' Julian Assange.

Or how about a smidgeon of Cosmic Art titled Comet Skies? 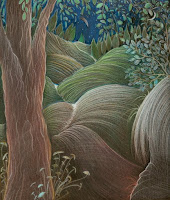 I did take your suggestion to see the International Space Station fly-by, which just occurred at my lat/long a few minutes ago (early Saturday morning, Aug 13th).

Amazing sight! It was very bright rising in the Northwest, and it was unlike anything I'd ever seen.

Really I had no idea it was even visible from earth. This makes the loss of the U.S.'s space shuttle so much more meaningful. That's our Space Station, and we have no way to get there! (Except by hitching a ride with the Russians?) What would JFK think?! Or LBJ, RMN, or any other of the famous initials?

Again, your tip was really appreciated. I have seen a few rocket launches and the July 2009 Shuttle lift off from about 70 miles away. (Which you could see for about 10 seconds).

This was a fun way to start the day. Now to the grocery store for more mundane things.

So glad you spied it! Was it spying you back? ;p

It's been just cloudy/stormy enough here in northeast GA to discourage such efforts. :(

Have never seen any launches myself but will soon see some friends who went down for the final shuttle launch & hear some eye witness accounts.

Thanks for letting me know of your amazing experience, and keep looking up--something we all need to do more often in these difficult times! Jude