Horoscopes: the Solar--Lunar Eclipses of Nov-Dec 2011


In answer to a regular reader's request, here are images of the November Solar and December Lunar Eclipses of 2011 on the same page. You may wish to click underneath each image to read my original posts containing chart details; click charts to enlarge and hopefully you may read a few additional notes that may not be mentioned in post texts.

First, the November Solar Eclipse with its "peculiar turn of events" vibe: 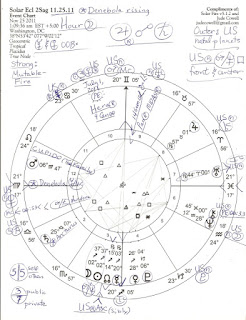 Neptune (loss; deception; fraud) in Virgo, sign of Work, Employment, Service (incl police and military, immigrant agricultural workers, etc) shows unemployment issues on the eclipse horizon to be dealt with (or not, if you're GOP and don't mind crashing America to force an ideological point.)

This places our returning troops and vets (who need jobs and medical care!!) on the world stage (MC.) A bill to hire vets was 'supported' by Republicans last week so we'll see what difference such legislation makes for those who risked their lives on behalf of our nation. It also denotes the Occupy Movement (Mars!), demonstrations, and strikes remaining in the news though my hope is that sit-ins will make a big comeback.

The safer our protests and marches, the stronger the Occupy message will be (and the happier American moms like me will be!)


US Natal Mars Weakened and Self-Deceived by Neptune's Wand

Natal Mars at MC, the most visible point in any chart, indicates that how the US government treats or mistreats our returning troops (and how dot gov has already treated veterans including loss or the burning of body parts) will be a topic on the World Stage into *2012 along with Occupiers and how US cities' mayors, and other government and police officials treat them. 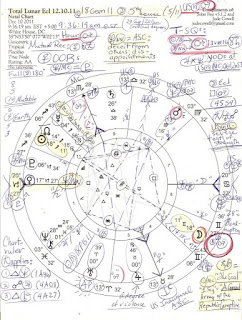 Astro-details for this horoscope are here in a column spotlighting an 8th house Mars in Virgo squaring the December Lunar Eclipse, as you see.

A neglected tidbit in the post I will add here: Mars square the Nodal Axis (The Public; Publicity; Future Direction; a Joining Point of Encounter) shows conditions where the action and impulses of Mars (generally, males between ages 25-35, give or take a year or two) are at-odds with current social values. Standards are in conflict (may highlight 'conflict of interest' issues) with society; aggression (Mars) may be inappropriately expressed in the wrong place or at the wrong time.

When Mars squares NN from Virgo, sign of purification and discrimination, the dynamic martian energy can irritate, annoy, and frustrate others for Mars can't or won't act in harmony with the environment, or with colleagues. This aspect may indicate environmental issues as well especially with the Nodal axis connection to the sensitive Moon (here, we the people) which can soak up whatever is in the environment like a sea sponge and may link to contagions of some sort.

Plus, the Lunar Eclipse conjoins US natal Mars (see my scribbles outside the chart.)


Next up in cosmic events and SO'W columns to describe them (As Above, So Below!) is the Winter Solstice 2011 Horoscope which I've begun preparing and intend to publish before many more days flit by...

More reading: USA's First Overthrow: Hawaii where a suit-wearing President Obama has flown for the weekend, to attend APEC Summit 2011 and where yet another US-job-killing trade agreement is listed at the top of our Globalist President's agenda.

You know I like how Max Igan talks about Trust Law and how The People of a nation are the law. Politicians and government officials--the public's employees--simply use police and military forces to uphold manmade statutes and regulations--which are not law.


We The People Are The Law.

Will they weep because a similar dynamic occurs in 2012 as during the year of the last manifestation of the 14S in 1994, the year of the Republican take-over of Congress and the 'perceived' popularity of Newt Gingrich?

Well, whoever is up in the political polls then, we know that major reforms will continue across America and the rest of the world. And may they be for the benefit of The People.
Posted by Jude Cowell at 1:19 PM