Of Robber Barons, Romney, and Campaign 2012

"A corporation has no rights except those given it by law. It can exercise no power except that conferred upon it by the people through legislation, and the people should be as free to withhold as to give, public interest and not private advantage being the end in view."

May 10, 2012 was the 126th anniversary of the Corporations Are People sleight-of-hand which has forced its tricky thumb upon the scales of justice ever since. Click for a few astro-notes concerning the day, May 10, 1886, and a brief explanation of how things went askew against all common sense.

Interesting that the illustrious Bryan made his remarks on the true nature of corporations in 1912, 26 years after the Big Ruse was purposefully put in place through the enthusiastic collusion of railroad titans of the day, aka, Robber Barons, and for good reason.

The Ohio Constitutional Convention of 1912 was all about progressives wanting to rid Ohio's government of corruption and to quite an extent they succeeded though women's right to vote and equality for all races were progressions too far. These days, we have regressives calling themselves 'Republicans' wanting to roll back those rights which is doubly backwards since the first instance--the whackadoodle notion that "corporations are people, my friend" is what should be rolled back instead.

In case you haven't signed yet, here's a link to Senator Bernie Sanders' effort to Overturn Citizens United, the SCOTUS decision of January 2010 which brazenly gives the Corporate Leviathan even more "legal" power to devour We the People for breakfast, lunch, and dinner. But unlike in 1886, no court clerk's 'error' was needed to shaft us on the sly.

And below you see the natal horoscope of the Robber Barons with my usual scribbles added. This chart is also known as the Generation of Materialism natal chart (Ed Meece), and here's how I complained about the Pluto/Chiron oppressors in February 2008. Of late, JP Morgan Chase's CEO Jamie Dimon has proven his lack of societal merit, I'd say--he kind of made himself into a poster child for the ravages of corporate inbreeding when it's allowed to flourish under its own hubris way past when corporate charters should expire as originally intended. 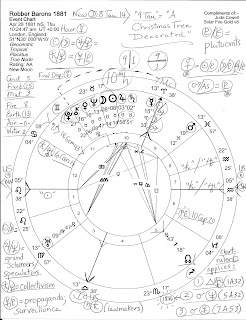 New Moon April 28, 1881 10:24:47 am UT London, England; Hour Mercury; final dispositor: Venus; chart-ruler Sun applies to a trine with Uranus in 2nd house of Money, a conjunction with deceptive Neptune (5A32 = 1886!), and a conjunction with evaluating Venus, also in her sign of monied Taurus; US natal Saturn in Libra is at the Foundation of the horoscope--and making it all 'legal'.

Please click image to enlarge and you'll see that this New Moon of the Robber Barons clocks in at 8Tau14--'9Tau' = "A Christmas Tree Decorated"; it's primarily a 10th house chart which well describes those for whom worldly power and wealth are more important than anything or anyone. The New Moon occurred around a Great Conjunction of Jupiter and Saturn, the societal planets with Jupiter represnting expansion, growth, and investment, and Saturn its opposite: contraction, restriction, and control. In conjunction and maturely directed, their energies can bring much wordly success.

And naturally, I don't have to mention the abundance of Taurean energy here since greed, possessiveness, and intolerance are The Bull's shadow traits (just ask The Bull on Wall Street.) Even Pluto and Chiron, the Plutocracy duo, are near one another in Taurus and in our time, met in Great Conjunction on December 30, 1999 at '12Sag' = "A Flag Turned Into an Eagle That Crows" (MEJ) conjunct US natal Ascendant. And after the attacks of 9/11/01, the American eagle crowed and can't seem to stop.

And now, what's become a golden oldie from the stump of the Romney Campaign of 2012--you love it, you know you do!