June 19, 2012: New Moon in Gemini and Dual Natal Charts of Obama and Romney

Today's new cycle is timed by a New Moon in communicative Gemini and merits a lovely post by master astrologer Julie Demboski--with a charming and gorgeous art image included!

This New Moon @28Gem43 is the last lunation prior to June 20's Summer Solstice 2012--its Sygyzy Moon. Today's New Moon makes no major aspects to other planets which emphasizes its degree and house position.

But then its degree does oppose Galactic Center if you're interested that sort of cosmic connection!

Now, for those who'd like to view President Obama's natal chart on the same page with that of Mitt Romney, here is a dual image of both their natal horoscopes. Please click to enlarge for my scribbled notes and basic chart details: 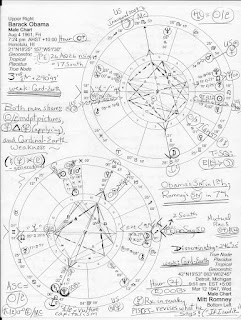 As you know, there's a big difference in having natal Sun in shiny Leo, sign of the natural ruler (Obama), and having natal Sun in obfuscating, confusing-confused Pisces (Romney), sign of deception, victimization, and what should operate as compassion in the personality. Plus, Gov. Romney has Mercury Rx (thinking processes, communication style) in Pisces along with Mars (motivation, action, energy) and this abundance of Piscean energies relates, I believe, to current questions as to 'Who is Mitt Romney?', his awkwardness with others, and what some say is his 'lack of a core' now being voiced by the press and others. But as astrologers know, Pisces can never really be fully fathomed!

Plus, you see the oppressive Saturn-Pluto conjunction at the Foundation of Romney's chart and psyche, what I call the vulture capitalist duo when it comes to Bainster Mitt. The duo's bullying energy is so strong that even his attracting-attractive Venus in aloof Aquarius at Midheaven--out there for all the world to see--can't change the fact that deep within his basic personality lies Saturn-Pluto energy and that is what he tries so hard to protect from scrutiny with his Piscean avoidances and non-answers for he seems to genuinely hope in January 2013 that he will enter the White House at long last and be the elite tool everyone knows him to be.