A New Moon July 19, 2012 Opposes US natal Pluto in Capricorn

Below is the horoscope of the New Moon @26Can54 on July 19, 2012 at 12:24:02 am edt Capitol Building Washington DC. It's a Saturn Hour with a couple of Cardinal T-Square patterns formed between a conflict-ridden Mars-Uranus opposition and powerful manipulator Pluto 7Cap46 Rx in 9th house (when the chart is set for DC), and Saturn/ASC pointing toward the Sun and Moon in 4th H of Home, Homeland, and Real Estate.

(Cardinality means that events are likely to occur if at least three factors support them.)

Perhaps the potential manifestations contained within the chart's midpoint pictures (from the T-Squares and other midpoints) will yield information about the new cycle of activity timed by this New Moon in Cancer, sign of home, nurturing, security, and business matters.

The pictures are listed below the horoscope image (with interpretations by Noel Tyl); any, all, or none may apply. Click the chart to enlarge for some basic information and for a notation that the transiting South Node of the Moon (3Gem52 in 2nd H) is now lining up with President Obama's natal Moon, an indicator of separation (from public approval? in the home? more threats to Mrs. Obama? hopefully not), bad timing issues and scheduling conflicts, and a lack of cooperation from others. Any misuse of position, power, wealth, or popularity may turn up on the president's menu over the next few weeks and will be hard to deal with until this difficult karmic influence has passed.

Plus, you see Mercury Rx @11Leo52 backing off a bit from transiting the president's natal Sun (a time of self-expression and focussing on one's own ideas--and of blending one's ideas with that of others) and is in process of a drawn out Mercury Return for Mr. Obama (2Leo19 in his natal 6th house with natal Sun which spotlights his interests in Health.) 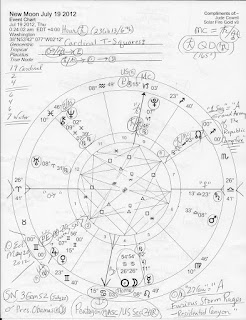 Mars-Uranus = Pluto: intervention of the big shock; force; a Higher Power. Pluto in 9th H may indicate troubles abroad with wars and occupations or with US foreign policy; terrorist attacks cannot be ruled out, plus, GOP opposition to Obamacare (6/12 axis) is obviously on the agenda of certain political factions with 'factions' ruled by Pluto in Mundane Astrology.

Saturn-ASC = Moon: difficulty being accepted; depression due to environment.

Saturn-Uranus = MC: recognition of one's thrust for individuality or loss of self to the grip of controls; break away from the old. (Saturn QD Uranus = interruption of governing systems; defiance of law and order--The Quindecile--Ricki Reeves); this picture is prominent for its angularity at MC and its connections to government, old v new, and the Middle East.

Saturn-MC = NN: major stroke of fate may affect all development.

A 2nd H Jupiter conjoins US natal Uranus which shows much activity concerning group causes and an expansion of personal networks; Venus 15Gem00 returns to her June 5, 2012 Transit position--both are 'money planets' so financial issues are denoted including the US Treasury (2nd H.) The 14 South May 20, 2012 Solar Eclipse (chart shown) may give people 'something to cry about' (conjunct Alcyone) with its degree conjoining 2nd cusp. At the least, 'an obsessive idea may finally be accepted' (Brady.)

The New Moon's Sabian Symbol ('27Can') relates to its 4th house position:

"A Furious Storm Rages Through a Residential Canyon" which highlights storms and water damage from weather conditions, possible turbulence at the White House, and/or a potential for more real estate or mortgage difficulties in the US. Yet perhaps the 'new cycle of activity' indicated by the July 19 New Moon will work on beneficial levels as well.