July 2012 US Progressions Not a Pretty Picture w LIBOR Implications

In 2006, America's natal Mars turned retrograde by progression. As it 'slowed down' to change from Direct motion to Rx it was what astrologers call, stationary. If ever a non-astrologer (as I assume th author to be!) described America's Secondary Progressed Mars Rx condition and some of its many effects, this would be it.

Here you see a horoscope of America's Secondary Progressions with Mars Rx in SP 2nd house opposite SP Venus in 8th H (2/8 axis of Money, Values, the US Treasury, Corporations, Big Business--you know the affected realms. See the Matt Taibbi interview with Eliot Spitzer, below, concerning the LIBOR scandal; our rage over it will grow as US SP Moon conjoins SP Mars in about two months!) And you know that Mars rules the military, police, and law enforcement--yet the DoJ is AWOL when it comes to corrupt Wall Street and other big bankers and traders yet law enforcement is deployed on the scene more and more when it comes to US citizens' dissent. American citizens being 'policed' with drones is also an outcome of US SP Mars Rx especially with Mars-ruled Aries on US Ic (Domestic Scene; Homeland.)

Please click the chart to enlarge and read a few basic chart factors such as Hour: Moon (changes, fluctuations, and publicity as in Campaign 2012 where image is everything and there's very little substance), and a midpoint picture affecting SP Sun (leader; leadership) which has come into orb with US SP Pluto-Chiron midpoint 8Pis17, the oppressive, corporatist plutocracy duo of vulture capitalists everywhere.

ASC 00Vir38 with Royal Star Regulus rising (success if revenge is avoided--uh oh) shows America morphing from SP Leo rising to the more serious Virgo rising which changes our progressed national chart-ruler from the Leonine Sun (which is never Rx by transit or progression) to Mercury which is, as you see, Rx in the 6th H of Military and Police Service (a growing work sector if you don't mind training to beat down your fellow Americans or occupy other countries), Work, and Health. On the level of Health, Mercury Rx here shows the Affordable Health Care Act under re-view by SCOTUS.

Now this is the same SP Mercury in Aquarius that was apex in a YOD pattern (crisis; turning point) with Neptune sextile North Node which gave us false expectations, and secret arrangements made in order to deceive; Mercury in general describes young people, reporters, bloggers, authors, agreements, trade deals and traders, commerce, speeches, thieves, secrets, and other Mercurial things. 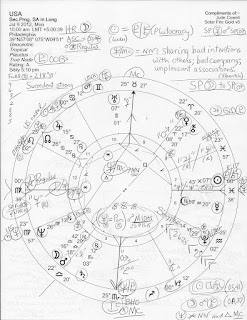 Another disturbing indicator of financial, religious, and political concern is the quindecile (QD; 165 degr) between the duo of Big Banking, Jupiter and Pluto, with Pluto at a critical-crisis 29th degree of Capricorn, sign of government, law, and business. Our natal Pluto 27Cap33 Rx is near US SP South Node, a separative Saturnian point which denotes war, brutality, and hard hard work for Pluto/SN has a Saturn-Pluto tone.

Jupiter is Rx by progression since 1905 when many of our troubles began in earnest as global thugs saw the end of their plan coming nearer to fruition. The banking Panic of 1907 was used to justify the creation of the Federal Reserve System (1910 - 1913) and so a time link is described by the Astrology of it all including the indisputable fact that US SP Jupiter Rx @15Can27 conjoins the natal ASC of...guess which entity?

Jupiter QD Pluto paints a picture of an obsessive need for power, control, and success with belief systems, opinions, and religion cynically used as forces for manipulation; ruthlessly gaining advantage is emphasized and major societal shifts are upcoming which must include a transformation of mass consciousness and reordering of perspectives. (Reeves.)

Yes, I am very sorry to report to you both that America's SP horoscope, which shows our nation's evolutionary condition (shown here for July 9, 2012)--as our Founding Astrologers must have seen as they looked into the future--is not in a positive state at the moment and threatens to morph our nation--is in process of morphing our nation--into a financially and spiritually bankrupted police state where total surveillance reigns, and privacy and private property are things of the past. But you don't need an astrologer to tell you this, do you?

LIBOR: like Libra's Mars Rx in a Money House

Below is a discussion on the global bid-rigging that's been practiced for at least ten years by 16 big banks (or more) and issues from the bowels of The City of London (which implicates what Eustace Mullins called The London Connection, the House of Rothschild, the Bank of England, and the British government.) The now spotlighted LIBOR corruption, which affects interest rates on loans and credit cards all over the globe, is simply the latest and probably the greatest of the World Banking Syndicate's crash-the-global-economy projects:

Another view of LIBOR is provided by Robert Reich. Another astrological view of LIBOR may be seen in US progressions with Neptune/MC = NN: sharing bad intentions with others; working with those who share your vision for the future; peculiarities (Ebertin; Munkasey; Tyl.)

Maybe the rotten-to-the-core revelations of LIBOR will be what Pluto creeping through Capricorn, toppling leaders and destructuring systems, is all about...or, maybe it's just what Mr. Underworld was waiting for as his ruinous methods are now uncovered. Can we expect The System to root out its own worms?