My blogging time is brief today but I want to publish a copy of the Secondary Progressed (SP) Horoscope of the Republican Party set for November 6, 2012. Below you see that during Campaign 2012 their SP Moon was within orb of an opposition to SP Neptune with Neptune at '14Pisces' ("A Lady in Fox Fur" --Jones; that's FOX fur! --jc; Dr. Jones gives the negative expression of "14Pis" as: "amoral opportunism" which describes the GOP, FOX News, and Rupert Murdoch to me. Yet some say that Mr. Murdoch and FOX are happy Mr. Obama won because it means more profits for them! Who would they complain about and undermine with their ridiculously obvious 'echo chamber' of lies if Mitt had won?) 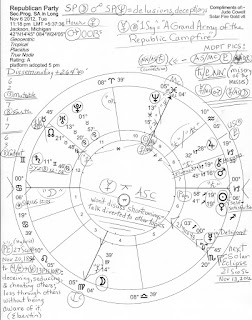 Horoscope: GOP Progressions for Nov 6, 2012; Hour Venus; Mars out-of-bounds of the earthly plane and up to who knows what in governmental Capricorn; Sun conjunct Venus (self-satisfaction.)

Jupiter-Pluto = Neptune (transit Neptune @13Pis10 Rx--in FOX fur!): deceiving, seducing, cheating others; loss through others without being aware of it (Ebertin.)

Now if you can, please click to enlarge the image and read a few more basic details scribbled around the chart. The 'my correction' refers to the mess I made when writing 'NN/AS = Saturn' in the midpoint pictures list, upper right.

As you see, the SP Moon on Election Night was in process of moving beyond an exact opposition of a few months' duration (Moon @14Vir39, Neptune 13Pis15) and since aspects are stronger as they apply (approach), the delusion and deception indicated by the Moon-Neptune opposition have begun to fade as the re-election of President Barack Obama gave the GOP a well deserved Wake Up Call (to which they remain as of yet, determined to ignore--when the president called Boehner and McConnell after the results were announced, Mr. Obama was told that both men "were asleep"--puh! another sour-grapes instance of GOP rudeness and disrespect shown toward the president.

Another factor I shall mention is the inconjunct (or, quincunx, 150 degr = adjustment, strain) between thinking-planning Mercury @00Sag03 in 6th house of Military Service (@"1Sag" = "A Grand Army of the Republic Campfire") and the SP Ascendant (the party itself) indicating that the Republicans won't discuss their shortcomings when they're brought up in conversation and they primarily deflect doing so by changing the subject to other topics.

Yet most realistic folk know that you can't repair problems unless you first admit they exist and correctly identify them! This week's constant stream by the GOP and party surrogates of blaming Hurricane Sandy disrupting Mitt Romney's imagined "momentum", Governor Chris Christie's appreciation of President Obama's aid and attention in New Jersey after Sandy hit, the Democrats' "supressing the vote" (they're joking on that one, right?!) is no way to fix the party's considerable problems which are platform-based and attitudinal.

Look at that SP Mercury--it's your harsh and antiquated ideas, stupid! And by SP Mercury's Sabian Symbol we may infer that war was/is a big part of their hoped-for strategy especially since the neocon Vulcans were set to ride in on Mitt's white horse and take over the White House and Pentagon if they'd won the presidency.

So with one of Neptune's realms being mass media--FOX News in particular, in this case--we can see that the people (Moon) were awash with the faulty propaganda and bubble-protected ideas of the Republican Party put out for those gullible enough to be swayed.

And though the Democratic Party has few members of a saintly nature, I'm glad the delusional GOP got beat on November 6th as heartily as they did. Now as the weeks go by, we'll see how disruptive Election Day 2012 Mercury's Retrograde period will be with lawsuits and threats of recounts already being announced. A good example is Rep. Allen West who sees "communists" lurking about the halls of Congress.

Which is amusing because I see Crazy Nutzoids lurking about the halls of the Republican Party...