On Monday December 17, 2012, America's arcane Electoral College casts their votes across the nation in order to settle the November 6, 2012 Presidential Election. Since President Obama garnered 332 electoral votes in November to Mitt Romney's rather anemic 206, few Americans fret that an upset is in store for the president.

But What Does Pluto Say?

As you know, voting Mercury performed a retrograde station at 6:03 pm est on Election Day 2012, then seemed to move in backward direction toward an opposition to Mr. Obama's natal Moon @3Gem21. Astrologers (and pundits!) everywhere predicted an extended ballot tabulation though hopefully not as contentious a one as the 2000 'hanging chad' election. And though state dust-ups have drawn things out in 2012, the presidential outcome at least has been straightforward.

And so, 'voter' Mercury Rx on November 6th may on one level symbolize the official Electoral College announcement of a definite victor which will be made on January 6, 2013 and will bring the entire 2012 Election process to a close.

By then, transit Mercury @9Cap32 will be in close conjunction with powerful Pluto @9Cap31 in the 9th house of Higher Education ("College"), as you see in the noon horoscope displayed below, set for the White House as a signifier for the entire nation; click chart to enlarge and perhaps you'll be able to read a few basic notes scribbled thereupon including US natal and BHO natal planets--one thing I neglected to fill in is, Mercury turned Rx "@4Sag18": 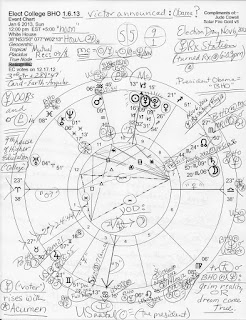 3rd quarter Moon = 'crisis in consciousness' stage; Mercury OOBs of the Earthly plane (may signify Mr. Obama's much larger share of votes); Mercury rises with Fixed Star Acumen (enduring attacks which weaken, not the only indication of weakness in the chart--see: Mars midpoint picture, below.)

Chart-ruler Mars applies (0A48) to a square with restrictive Saturn denoting blocks, challenges, issues of bad timing, and possible threats to authority; plus, add the Moon (the public) to the square with testy Mars and we may have some hot feelings in the mix--then the Moon will soon meet depressive Saturn--are the people's electoral wishes to be thwarted? Surely not!

Now since it's the noon hour (a good time for announcements), the Sun (the leader) @16Cap32 conjoins MC (The Goal) with the Mercury-Pluto conjunction on the 9th H side of the Midheaven; Venus @26Sag54 attends.

Midpoint pictures are formed which may or may not apply to our topic:

Sun-Mercury = MC: standing up to the test; successful communications.

Neptune-NN = MC: inability to achieve aims without the help of others.

The next two pictures only apply at noon with 23Ari38 rising but they may be worth considering in light of the contentiousness, denial of reality, and sour grape attitude of the Republican Party whenever they lose presidential elections after which they continue denigrating the character of the Democratic president who bested them--and this one dares to be African-American by half!

Mercury-ASC = Neptune: deception; falsehood; slander; libel; disappointed or deceived by others; thinking badly of other people.

(Midpoint pics from Tyl and Ebertin.)

One transit to the President Obama's natal chart listed on the horoscope but which must be mentioned: tr Saturn to natal Neptune in Scorpio which brings along the grim face of reality---or, allows a dream to come true.

So! You noticed the YOD pattern of crisis/turning point/special task? With the brilliant, innovative Jupiter-Uranus sextile at its base, the 7th H Moon @6Sco20 is apex of the configuration. Now Scorpio is a Fixed sign of rigid energy but the Moon is Mutable, changeable, and denotes fluctuations. Near staid, status quo Saturn, ruler of Capricorn (sign of government, law, and business), my suspicion is that the rigidity of the public's landslide for President Obama will hold with the aid of stable Saturn yet perhaps we shouldn't entirely discount a tendency toward Scorpionic betrayal ("faithless elector"?)

Or, are we only seeing the Fixed tendency toward decisiveness here? Well, the January 6th Moon in Scorpio could be describing some number of Electoral College voters who, after all, are members of the American public themselves. They have to be, right?

Thing is, an apex Moon in a YOD pattern indicates those who must learn to decode the emotional messages received from others so that they may set out on a new path ("lean forward"?) where the interests of the weaker among us are defended and addressed successfully. (Tierney.)

Yeah, I thought that's what we voted for in November.

And apparently in America, that is only possible with a Democrat in the White House, if indeed it's any longer possible at all.