Does a Presidential "pall" show in Inauguration 2013's Horoscope?

On May 15, 2013, Peter Baker of the New York Times published Onset of Woes Casts Pall Over Obama's Policy Aspirations a headline in which astrologers can easily find mention of Inauguration 2013's Midheaven (MC = The Goal) if they so desire.

Then today, the Washington Post's Dan Balz published Obama's Trust in Government Deficit so we find that MSM and other media types are jumping en masse onto the Doubt Obama bandwagon. One supposes it sells or clicks for their bottom lines or for whatever Down with Government ideologies anyone may hold as they and their hidden backers work to weaken America toward easier take-over.

Now as you remember, President Obama's second term officially began at noon on Sunday January 20, 2013 but the public swearing-in was held on Monday January 21, 2013 due to the tradition of avoiding Sunday sacredness (my personal belief is in the Seventh Day Sabbath so it would make little difference to my ilk if the ceremony had been held on a 'Sun'-day, the first day of the week as you see on your calendar--but his first term ended and a new one began at noon of January 20th with the primary difference between the two horoscopes being Moon in Taurus on the 20th, Moon in Gemini approaching Jupiter Rx in Gemini on the 21st; President Obama's natal Moon is in his 4th house @3Gem21.)

So here's a another look at the Inauguration Horoscope of January 20, 2013: 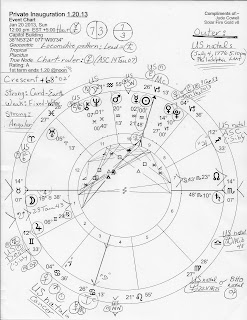 For astro-notes on the chart, see my previous post Inauguration 2013 Horoscopes (both charts shown) though of course no one knew then what scandals would occur--or which events would be blown out of proportion. ("Worse than Watergate"?, cry Republicans. Really? Well, I resided in Washington DC during Nixon's Watergate scandal and I don't believe you or your politically driven 'outrage'.)

In the horoscope above, I point your attention to its 1st house South Node of the Moon and my reading of it in the linked post. SN in 1st house is not a good portent and describes early-on difficulties for the president's second term. In part, a rising SN denotes the separations I mention in the post, plus, bad timing with one's endeavors along with limiting conditions. In a word, the Republican plan of obstructionism.

For as Tamara Keith of NPR reports concerning 'Heritage Action': Conservative Advice To GOP: Don't Legislate, Focus on Scandals in an attempt to ensure that the president's agenda will be stymied and obstructed during his second term--leaving the American people to suffer as collateral damage, as usual.

How I wish Election 2014 results for all obstructionist-Ayn-Randers in Congress with their lousy children-starving, survival-of-the-fittest Shrink Government agenda would find them tossed out with their dirty bathwater!