Astrology of the Trayvon Martin murder on Feb 26, 2012

On the Murder of Trayvon Martin, Teenaged Skittles Purchaser

Update: evening of July 13, 2013, George Zimmerman is rewarded with a "not guilty" verdict; meanwhile the teen packing a pkg of Skittles remains dead.

Perhaps you can tell by this post's subtitle that imho, being stalked on a rainy evening by a man with a gun is a good enough reason to turn and 'stand your ground' against your stalker. With the ongoing trial of shootist (Mars) George Zimmerman in Florida, I bow to the many astrological analyses already available online.

One such is Daykeeper Journal which has an interesting analysis that includes a few asteroids and black holes (which I don't use myself never having time to make chart studies and subsequent blogging more complex though I much appreciate the facility of those who do use them.)

Wanting to publish a bit on the tragic murder of Trayvon Martin, I checked out the applicable horoscopes including Martin's (TM) natal planets (hour unknown) and that of self-styled community watchman, George Zimmerman, whose time of birth is as yet unknown as well. Therefore, I set up both their natal charts using the hour, minute, and second that a 911 call registered the shot that killed: February 26, 2012 @7:16:55 pm est Sanford, Florida.

Here you see my version of the horoscope of Trayvon Martin's murder with his and Zimmerman's natal details to follow. I shall add a few bits of information which may or may not appear elsewhere by other authors, and perhaps you'll click to enlarge the chart image for more notes: 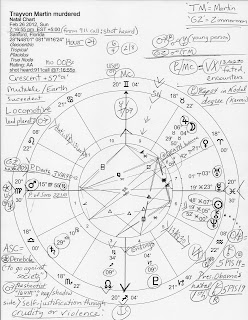 February 26, 2012 7:16:22 pm est Sanford Florida; Hour of Jupiter in the 8th house of Death and Transformation--Jupiter trines the 4th house (Endings; Partings) Pluto @9Cap04 (the assassin) and their midpoint = the Sun @7Pis48 denoting successful use of extraordinary power--on that evening, a gun.

GZ's natal Mars conjoins the shooting's Part of Death @3Vir40 in 12th house; the karmic ('fated encounters') Vertex @13AQ30 is in 5th house of Children and Risk-Taking and sits upon the Pluto-MC midpoint with its potentials for 'a desire for importance, authority, fame; the likelihood of sudden ruin through the misuse of power; a tendency to create feelings of resistance and vindictiveness in others; and/or a crisis that precipitates a turn in one's destiny'. (Ebertin.)

Rising is Fixed Star Denebola (to go against society) along with America's natal Neptune--which places US natal Mars at MC and implicates our problematic Mars-Neptune square of misdirected motivation, misguided actions, and the 'fog of war'. And of course the Virgo-Pisces polarity signifies victim-savior archetypes.

Chart-ruler Mercury @23Pis19 conjunct Descendant can very easily represent Trayvon Martin (young person) and the planet's condition of no applying aspects signifies that his life ended--no further action can be taken by the victim. And of course, all the Pisces energy indicates illusions, pretense, and the evening's rainy conditions. As you see, shooter Mars Rx opposes Mercury and both 'meet' via midpoint at Midheaven (The Goal or Why? Point) so we have Mercury-Mars = MC: bravura; ready to win the fight; ready for action; determination; ability to retaliate in a proper manner (Ebertin.)

Another midpoint picture is of interest especially considering Florida's 'Stand Your Ground' law which the Zimmerman trial should spotlight: Mercury-ASC = MC: taking one's stand (Tyl.) Yet with Mercury involved in this picture (and not shootist Mars) this hints that it was Trayvon Martin taking a stand--a stand against a "creepy" stalker.

Applicable to this tragedy may be Adriano Carelli's symbol for the Vertex degree (he doesn't use the rounding up method) and I shall close this post with it along with a mention of the Sun-Neptune pair in confused Pisces which snug about Wounded-Wounding Chiron @5Pis19, the exact position of President Obama's natal Chiron Rx (5:19 in his 1st house of Self.) Was Zimmerman on the lookout for Obama stand-ins?

'13AQ' = "An array of medieval knights; shields, doublets, and shabracks are showily trimmed with each warrior's own heraldry."

"Attachment to one's own interest and to the interest's of one's family and clan; combativeness in all fields, from literary polemic to real weapons. Fine manners and quick action.

All these features may sublime into the highest virtues--watchful and selfless daring, love of one's home and ancestry, human solidarity, noble pride--and may ebb into the correspondent vices--unscrupulous and reckless aggressiveness, a decayed gentry's pride and prejudice, a gangster's solidarity with crime, conventional formalism.

The native will have to be on the lookout if he is to avoid destiny's unexpected blows, and he will have to respect his neighbors if he wants to be respected himself."

Well! That last is great advice for everyone, including George Zimmerman.

Now here are the birth details and planets of the two main actors in this tragedy with a few notes added:

GZ: Sun 12Lib08, Moon 5Lib17, Mercury 25Vir24, Venus 00Vir05 (conjunct Royal Star Regulus--'success if revenge is avoided'), Mars 3Vir41 (conjunct the shooting's Part of Death with a one-minute orb, see chart above), Jupiter 7Sag29, Saturn 4Sco14 (he's been involved in his Saturn Return off and on of late: accountability), Uranus 6Sag13, Neptune 26Sag40, Pluto 28Lib45 (conjoined by transit Saturn, a time when things can spiral out of one's control in situations that are too big to handle (ex: "Are you following him? We don't need you to do that"), and issues of power and authority fall under scrutiny), Chiron 2Gem32 Rx (another violent degree), and NN 18Gem13 which had just crossed the MC at 7:16:22 pm.

Also I want to mention the shooting's Water-Earth (mud) Sun Pis-Moon Taurus blend which denotes those who strive for security--perfect for residents of a gated community--and who have a strongly subjective approach to life. This blend is shared natally by Henrik Ibsen who informed us that, "Castles in the air--they're so easy to take refuge in. So easy to build too." (The Master Builder.)

For me this describes Mr. Zimmerman's dreams of doing police work and of being a knight in shining armor--aka, a hero or a savior. And Ibsen's title makes me wonder if the castle-building Mr. Zimmerman was, perchance, a Freemason. But that's only in my imagination, right? And a post for another day...