Here's what I posted here in August concerning the 16 North Solar Eclipse which manifests again on November 3, 2013--my post was actually about Mary Shelley's dream one stormy night which became the basis of her chilling novel, Frankenstein:

The November 3, 2013 Solar Eclipse @11Sco15 (in 12th house of Politics, Large Institutions, and Karma when the chart is set for Washington DC) is of the 16 North Saros Series and carries a tone of Uranus-trine-Neptune, the pair of Enlightenment planets.

If you've read any of my posts on Solar Eclipses you know one of my favorite resources is Bernadette Brady's book, Predictive Astrology (aka, The Eagle and the Lark). However, the date of the initial eclipse in the 16N Series is apparently incorrect since I can find no Solar Eclipse--only a New Moon @6Pis02--for the date of 'February 15, 1599' though an eclipse did manifest on January 26, 1599 (NS) @6AQ19--and it has Uranus (23Ari25) trine Neptune (24Leo53 Rx), both creative Fire signs. This is important because the initial (beginning) eclipses in each Saros Series continue to flavor subsequent manifestations of that Series, and the 16N on November 3, 2013 brings forward the Uranus-Neptune tone of their trine.

So with its vibes beginning to be felt in late October-early November, 16N relates to 'a sense of inspiration; illumination of ideas; sudden release of material from the unconscious which brings with it a great deal of insight; these ideas are good and it would be wise to act upon them' (paraphrasing Brady).

A trine between generational planets Uranus and Neptune denotes intellectual awareness that will accept or reject ideas believed by previous generations. Ideologies, theories, and dogma are all subject to evaluation in the realms of politics, philosophy, and religion. Ideas and plans that will radically alter destiny are under deep suspicion and critical eyes focus on past enforcement upon humanity of ideologies that were expected to be blindly and obediently accepted.

The November 2013 Solar Eclipse of the 16N Series will bring to mind the period between 1938 and 1944 (when Uranus and Neptune were trine) and the mass hysteria induced by the likes of Stalin, Hitler, Mussolini, and Hirohito. Apathy and indolence (trine) of the era allowed the destruction of many lives and futures to be implemented by dictators who, like modern-day globalists, were determined to force a 'new order' for the entire world.

I believe that this in part describes what we're seeing on Capitol Hill these days and it explains the Republican-Tea Party 'crazy train' of bad ideas meant to collapse the most prominent nation-state in the world: America, so that a 'new order' can be built upon the ashes of the old. I'm not in favor, are you?

However, with the rise of the internet and access to much info for the masses, the Uranus-Neptune trine influence contained within the November 3, 2013 Solar Eclipse does give us the ability to see through illusions, dishonesty, and the pretensions of politicians and their corporate backers. Yes, this 'wild card of the Universe', the November 2013 Solar Eclipse, may just be a sign post on the trail to a Global Awakening of the Masses! 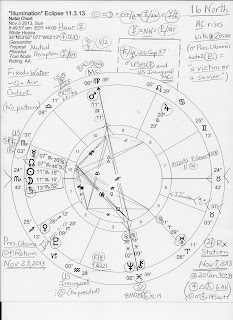 November 3, 2013 8:49:57 am est Capitol Hill Washington DC; Hour of evaluating Venus (out-of-bounds of the earthly plane--not playing along? outstanding in her field?); Mercury @7Sco26 Rx is in Nodal Degree (karmic) and karmic planet Saturn @13Sco52 is Lord of the Eclipse (11Sco15), all in the 12th house of Politics and Karma, as noted above.

As you see, the Aspirations of the chart (MC) 26Vir39 has warrior Mars @11Vir11 nearby in 10th house of the World Stage, possibly a karmic position ('11:11') and just past his opposition to deceptive Neptune @3Pis36 Rx in 3rd house of Communications and Transport. The Mercury-NN contact is related to transport and the opening of new corridors.

The only such project I am aware of now is the Port of Savannah, Ga expansion in preparation for a new lock opening in the Panama Canal. This is to increase access for the benefit of 'world trade' though my suspicion is that security concerns must tag along with larger shipping vessels.

(Rather ironic, isn't it? The South's lucrative trade with foreign countries was one of the causes of the Civil War.)

Chart-ruler is testy Mars with sub-ruler Pluto @9Cap28 in the 2nd house of the National Treasury, Values, and Earning Ability. Mars applies to a sextile with Saturn (2A41) indicating priorities being set and sacrifices being made. Planning and scheduling are efficient under this aspect of good organization and details are handled masterfully within projects though personal power may be hidden and is allowed to be limited by others (Epstein.)

The Uranus-Pluto square is separating (0S06) and may be acting more on an unconscious level for now--a background default program--with additional protests, riots, and strikes still to come; Uranus and Pluto are both at 9 degrees indicating a karmic condition between them from 2nd house (money) to the 5th house of Speculation, Gambling, Creative Projects, and/or Children.

The 8th cusp @25Gem13 is ruled by Mercury Rx (in the money, surveillance, betrayal, and big business sign of Scorpio) with the 8th house relating to Corporatism, Shared Resources, Debt, Credit, Insurance, and Legacies.

Therefore, Geminian duplicity influences this money house and with eclipses having the power to uncover hidden secrets, we'll find opportunities to better handle the karmic revelations that come along through the rest of 2013 into 2014.

In 8th house is Jupiter @20Can29 about to perform its Rx Station @20Can30 on November 7, 2013. '20 Cancer/Capricorn' are critical degrees and a worrisome midpoint picture appears in the Station chart...

Sun-Neptune = Pluto: a tragic deception or illusion so We the People will need all the awareness we can manage if we wish to improve social and economic conditions in America for there are few if any politicians on Capitol Hill who wish the same for our nation.