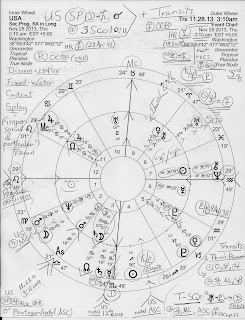 Secondary Progressions: Hour of Mercury (20AQ27 Rx in 6th house of Daily Rounds, Work, Service, and Health); SP Pluto @29Cap16, a critical or crisis degree, remains out-of-bounds of the earthly plane and has moved into SP 5th h--SP South Node @26Cap15 is closer than ever to Pluto indicating the US War Machine as the military arm of Pluto's forceful agenda; chart-ruler Sun @9Pis06 is in SP 7th h denoting a 'giving away' of control to others (Sun = leader) and transit Chiron currently conjoins this Sun showing the wounds now being inflicted upon President Obama, many of which involve the failed debut of the ACA website (Neptune = webs, networks, falsehoods, failures, losses); SP Jupiter Rx @15Can24 continues its conjunction to the Pentagon's natal Ascendant showing the bottomless money pit that Washington politicians through the decades have allowed our military misadventures to become.

As you see (click image to enlarge), transit North Node (NN,a Jupiterian point of encounters and alliances) is moving nearer the SP Moon-Saturn conjunction which will separate at the end of December 2013 so we may expect the usual rush of excited energy for New Year 2014, at least until vinegary Washington politicians sour things the way they apparently prefer them. Single digits! Did you hear that Congress' approval rating has now dropped to 9%? Wonder what's the matter with the 9%? As some say, that's counting their family members and friends!

(Blog Note: as I began to type this post a look at my Solar Fire software was warranted and I discovered that Mercury's current position a few minutes before 11:00 am EST is: 3Sco10. Hmm.) '3Sco' = "A House-Raising" in the Sabian Symbols and what this could mean for Congress and the American public who holds their sorry antics in low regard is your guess and mine. Of course, real estate and property values may also be denoted.

Now if you look to the 2nd house of the National Treasury and Values, you see the transiting Ascendant (the WHAT? Point) on November 28, 2013 at 3:10 pm (another '3:10'!) is @18Lib25 and so brings up US SP Mars @18Lib22 and retrograde since Summer 2006. '19 Lib' is the "A Gang of Robbers in Hiding" degree with its negative expression: 'abnormal mistrust of everything worthwhile" (Jones.) But robbers? The world has gracious plenty of those for every occasion.

In 4th house, the transiting Saturn-Pluto midpoint of loss, cruelty, and hard work, now conjoins US natal Ascendant which indicates cold feelings, melancholy, working with powerful or influential people, and/or, silent power (Ebertin; Munkasey.) This echoes the Saturn-Pluto opposition which conjoined the US natal ASC-DESC axis for the 9/11/01c coup. ASC-DESC = Self and Others, and Saturn-Pluto's activity in our natal chart also supports the depressive aspect of the SP Moon-Saturn conjunction.

Does our November 28th Moon-Saturn conjunction in Scorpio, sign of Regeneration, Surgery, and such, give us an astro-picture of the public's (Moon) depression over and delays (Saturn) in the health insurance sign-up process? In a previous post I mentioned that transit Mercury (websites, technology, signing up, contracts, negotiations, news, etc) will leave his retrograde shadow, the degrees he retraced during Rx phase, at the end of November 2013 which tallies with what the White House hopes will be the date by which the Obamacare website will be operating on or near its best performance level. And all of it encounters our SP Moon-Saturn conjunction!

Yet could the SP Moon-Saturn conjunction may be timing improvements more accurately? If so, their separation by at least one degree at the end of December 2013 may denote a brightening of the American public's prospects in the realm of healthcare and health insurance.

So what is a Progressed Moon-Saturn conjunction telling us about ourselves and our society for Saturn, along with Jupiter, are the societal planets?

SP Moon to Saturn indicates a period of dealing with basic survival for many Americans as we seek safety for ourselves and our families--perhaps another reference to the benefits of Obamacare, if those who need it can get its coverage. During this "don't rock the boat" conjunction, productive work wards off anxiety and depression and each person must do what they have the power and opportunity to do--then, let go. Plus, Pottenger and Dobbyns have called a Moon-to-Saturn conjunction in Progressions a "cosmic report card" concerning "how we are handling the rules of the game."

Well! Since the collective must necessarily include members of our 9%-approved Congress, I suspect their report card shows a big fat F minus next to the president's F, don't you? Perhaps demonstrations and protests are on the public's menu--but let's not give up on America, just on those who undermine our nation!

Another factor I must include is tr Mars' visit to US natal Neptune and SP Neptune (unwise decisions and actions, disguised culpability, hidden motives), as you can tell by Mars' position @24Vir59 where Mr. Quarrels has just entered the SP 2nd house with its cusp @23Vir19. And there in 2nd house awaits our SP Mars @18Lib22 Rx so there are multiple references to Mars-Neptune issues and concerns that have America's natal and problematic Mars-Neptune square 'running in the background'. The square's 'misdirected energy/misguided actions' inclinations just keep on tripping us up via the self-undoing of the political establishment's overly enthusiastic plans for conquest, domination, and fraud.

Additionally, President Obama is not left out of the situation since his natal Mars in Virgo conjoins US natal Neptune, a synchronicity between 1776 and 1961 that helped create the 'rock star' vibes of 2008 which made him popular, and which veils or obscures the public's clear view of his actions and motivations (she's blogged a zillion times before!) Yet with the president's approval rating now below 40%, it seems that the Inauguration 2013 horoscope wasn't kidding about a drop in his popularity with its 1st house Moon (the public; popularity) near the 1st house South Node of the Moon, a Saturnian point of separation and disfavor.

So we can't discount the possibility that the November 28th SP Moon-Saturn conjunction is descriptive of the low point in President Obama's approval ratings so if his popularity climbs in December--which one assumes it may once the ACA website is workable and more people have discovered better insurance and the amounts of their subsidies--we may assume that the SP conjunction correctly timed the president's ratings bottom and marks the start of a gradual improvement in public opinion.

Well, as you see, there are many more factors worth noting from both the November 28, 2013 SP chart and the planetary transits on what is our annual Thanksgiving Day, but my blogging time isn't as expansive as it once was, so I'll hush for now and publish what I have so far. As always, your comments and/or analyses are warmly invited!

Correction to the SP horoscope: near the top of the chart, I have wrongly labeled Mercury's SP position as '23Ari41' though it's noted above that SP Mercury is @20AQ27 Rx in 6th house. '23Ari41' is actually the position of SP Venus! And on another note: astrologers such as Nicholas DeVore call '3 Scorpio' the 'Fall of the Moon' degree which, if so, may only make matters more difficult for the length of time the Moon-Saturn conj is in effect through 2013. Obviously, its opposite degree, '3Tau' is the 'Exaltation of the Moon' degree and is considered to be fortunate; also, it is the degree of Chiron in its Discovery chart of November 1977 (3Tau08 Rx). jc