Horoscope: Lyndon B. Johnson Sworn In On Board Air Force One

With this Friday, November 22, 2013, being the 50th anniversary of the assassination of President John F. Kennedy, much of media is devoted to bringing the public all manner of programs concerning the Day America Died and the conspiracy theories which continue to swirl about. For one, Friday evening beginning at 7:00 pm EST, MSNBC airs topical programs which crescendo at 9:00 pm est with Rev. Al Sharpton hosting 50 Years of Guns.

Here's a round up of TV coverage concerning the 50th anniversary of the assassination.

Yes, wallowing in the eternal mystery of JFK's murder seems to be required for the 50th anniversary and it's certainly understandable considering The Coup's subsequent effects upon our nation including Johnson's escalation of the Vietnam War and the lucrative expansion of the US military. But how about a view of the horoscope of Lyndon Johnson's presidential swearing-in on board Air Force One prior to its take-off from Dallas on November 22, 1963? The record shows the ceremony occurred at 2:38 pm.

Naturally, the planets remain in their zodiacal positions from 12:30 pm, the time of the shooting with the Aquarian Moon moving one degree closer to depressive Saturn, and the cusps changing signs--Ascending in the swearing-in chart you see below is 5Aries45 (ASC was in Aquarius with Saturn and the Aquarian Moon barely risen at 12:30 pm.) This makes Mars the LBJ presidency and oath-taking chart-ruler with the sign and house position of Mars @20Sag35 (Sagittarius being the natural sign of the 9th house of Foreign Lands and Philosophies) all important. And perhaps a chart-ruler applying to no other planets is similar to the out-of-bounds (OOBs) condition: no one can interfere with what's intended to be done, and/or things will not turn out as expected.

You also notice that LBJ is in process of a Jupiter-to-natal-Saturn transit, a time when one may rid oneself of a restriction (as noted in my scribbles, upper right of the chart.) Well, he is credited by some researchers as the executor of the JFK assassination, or at least, may have had a part in the charade. LBJ, did, after all, benefit greatly from Kennedy's death. Or he assumed he would as 'leader of the free world'! 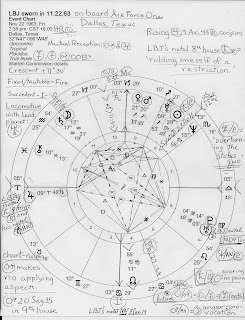 Hour: Sun; Mercury, Venus, and Mars are OOBs; LBJ's natal Saturn is his first natal planet to rise along with transit Jupiter @9Ari48 Rx, and LBJ's natal Uranus-NN midpoint of radical politics is caught up, too...Ura-NN = n Saturn: encountering difficulties with others; accepting control by group vote; Ura-NN = tr Jupiter: the big opportunity comes to those who demand it (Tyl.) The Sun (leader) remains at a critical crisis 29th degree but rounding up we have: '30Sco' = "A Halloween Jester." Sun is also involved with the cruel Saturn-Pluto midpoint which denotes much toil and sparing no pains in one's work. (Tyl.) This must apply to JFK and then to LBJ.

Two YOD patterns with crisis and 'special task' implications, are seen (please click image to enlarge) with NN @11Can55 the apex of one YOD, and the Uranus-Pluto conjunction at apex of the other (though this YOD was tighter at 12:30 pm.) Uranus-Pluto on one level denotes 'overturning the status quo' and this somebody or some group obviously did in the showiest way imaginable. As far as the Grassy Knoll theory of at least two shooters, it's always seemed interesting to me that the Sabian Symbol for '10Virgo' (the position of anarchistic Uranus) is: "Two Heads Looking Out and Beyond the Shadows." And of course, vengeful Pluto is the assassin and the saboteur--or, the wealthy patron of such criminal actions.

You'll also note that oath-taking Mercury @9Sag53 conjoins Antares whose keywords show an obsession with success and leanings toward war.

Let's close with the Water-Air Sun Sco-Moon AQ blend's 'Images for Integration' to describe that sad day in Dallas: "A hovering hawk surveys the world, at one with nature" which reminds me of the book depository window in Masonic Dealey Plaza, and "An exotic moth emerges from its chrysalis, in perfect form, a specimen of the sublimity of nature's intelligence." (Charles & Suzi Harvey.)

Can you see the newly emerging President Johnson in the horoscope and in the Image!

For your further consideration, here are three previous posts, one concerning the assassination of Robert F. Kennedy, one that contains a video presentation on the mysterious death of JFK Jr, and the third post on the Sun Sco-Moon AQ blend of the JFK assassination. May all three Kennedys rest in peace.