The following horoscope for Ukraine is one of three given in Campion's Book of World Horoscopes. It is set for December 1, 1991 6:00 EET when the announcement was made after a referendum that Ukraine was legally independent and the country "began to function as a genuinely independent sovereign state." I choose to show this version of a Ukraine natal chart because one of the current transits involves government-toppling Pluto in Capricorn now crushing natal Uranus @11Cap57 in the 6th house of Police and Military Service: 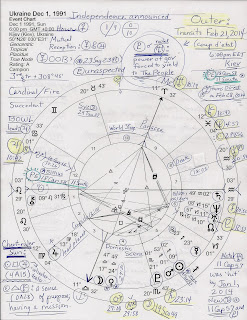 Ukraine December 1, 1991 6:00 pm EET Kiev; Hour of Venus; Ascendant 3Leo29; chart-ruler Sun (Leadership) @9Sag02, Moon (The People) @17Lib48. This is a Fire-Air blend which denotes a 'live wire' relationship full of bombast and impracticality--the 'Utopian idealist' or maverick with many ideas who lives at a very fast pace.

Sun Sag-Moon Lib reveals Ukraine to be replete with philosophers who possess social consciences, and those who like to frequent coffee shops and theaters. It is a warm-hearted combo of energies with a streak of prophecy tossed in yet it can be assertive, aggressive, and temperamental when challenged or treated unjustly as The People have been of late when President Yanukovych succumbed to Russia's trade deal rather than agreeing to the one offered by the EU.

See How Much Money Did Ukraine Lose When It Nixed the EU Deal? and more on the violent protests which began peacefully.

Now as natal chart-ruler, the Sun makes only one major applying aspect in the chart, a square to Jupiter which is the lead planet of the chart's Bowl pattern. This IDs the country and its leaders (Sun, Jupiter) as wheeler-dealers who don't mind bending the truth when it suits. Alan Oken calls a Sun-Jupiter square 'the squanderer' aspect if that tells you anything about the quality of the leaders the good people of Ukraine have had to put up with (as in America and elsewhere!).

Now let's discuss current transits to Ukraine's natal horoscope and as you see (please tap or click to enlarge), the ones for February 21, 2014 (coup d'etat?) are penned around the outside of the chart. However, in my quirky Uranian way (Uranus in 10th house), I'm going to list the transits for January 22, 2014 since that is the date of the first deaths of protesters and police officers.

So by consulting the displayed horoscope with February transits you can see how far the planets have moved since January 22nd--and that Mercury Rx now sits upon the country's natal 8th cusp of Death and Transformation. Mercury Stations Direct on February 28th @18AQ09 and will cross 8th cusp again; Mars will Station Rx on March 1st @27Lib31 (in natal 4th house of Domestic Scene--Mars = activists, protesters, police, military, and males between 25 to 35, give or take a year or so); Jupiter Stations Direct on March 6th @10Can21 and is, as you see, conjunct natal South Node, a point of separation, in the 12th house of Politics.

you'll undoubtedly notice more aspects to natal planets but these are the planetary influences I see as most affecting current events in Ukraine.

2014 Sun conjunct UKR Saturn @2AQ49 in 6th h: authority is highlighted, police and military are used by the president;

2014 Venus conjunct UKR Neptune @15Cap08 in 6th h: someone is out of touch with reality and hard to pin down, disguise is afoot, and mysterious events take place;

2014 Jupiter conjunct UKR South Node of the Moon (the public) which may be on one level a karmic picture of a president stepping down as he did; Jupiter also opposes UKR Uranus @11Cap57, the exact position of the January 1, 2014 New Moon and transiting Pluto! Jupiter opposite Uranus shows it to be a negative time for Politics and Group Endeavors as everyone goes off in different directions--including fleeing presidents and resigning cabinet members;

2014 Saturn conjunct UKR Pluto @21Sco01 in 5th h of Risk-Taking, but very close to the 4th h: situations are too large to be kept under control and there may be deep disappointment about something from the past;

2014 Uranus square UKR Uranus in Capricorn supports disruptive circumstances, separations, and unpredictable events as obstacles to personal freedom are met with an independent spirit; additionally, you see that transiting Uranus, planet of rebellion, rioting, and revolution, is at the top of the natal horoscope at Midheaven (11Ari32), the Goal Point of any chart with revolution and fire in the streets of Kiev being highly visible upon the World Stage--in Independence Square! What better place for the ongoing Uranus-Pluto square to trigger its work of rebellion?

You may wish to view the following video concerning the Divide in the Ukraine--Russia v EU, with astrological Uranus' 'separation and disruption' vibes on display:

One last note about the natal chart: in UKR's 12th house of Politics, Karma, and Secret Deals contains the country's Pre-Natal Eclipse @18Can58 in the 11 South Saros Series. Its themes include: 'the need for sudden reforms, old ideas and methods fail and new systems are needed to deal with events; any blocks could be violently or tragically removed.' (Brady's Predictive Astrology.) 11S last manifested on July 22, 2009 @29Cancer+ with '30Can' being the "A Child of the Revolution" degree in Sabian Symbols. 11S also occurred in the years 1901, 1919, 1937, 1955, and 1973, and will next turn up in year 2027.

During this dangerous time, my heartfelt prayers go out to the good people of Ukraine who, like all of us, deserve much fairer treatment from the government that is allegedly serving them. jc