Although yours truly is not a fan of RT, the following video is for those who are considering voting for Jeb Bush in 2016. Among other topics, it mentions what this American refuses to forget: that Jeb Bush was a signer of the PNAC (Project for a New American Century) bomb-Iraq pact along with Dubya, Cheney, Rumsfeld, Spit-Comb Wolfowitz, Perle, Kristol, and the rest of the neocon warhawk Vulcan gang that bankrupted our nation on behalf of their globalist/Zionist/corporate masters.

For Jeb Bush to insist he's his 'own man' is absurd yet he hopes the assertion will be part of a successful presidential campaign. After all, a few weeks ago his mother Barbara Bush changed her "pretty mind" and thinks Jeb should run in 2016 after all because he's the GOP's best chance to take back the White House! Maybe she's right---reverting to a neocon is the only idea the GOP can come up with.

If you're curious, here's a post concerning Jeb Bush's natal horoscope--he was born on Feb 11, 1953 during the off-again-on-again Saturn-Neptune conjunction. And here's the natal horoscope I published in the post with then-transits for March 2007 in case you don't care to tap or click for Jeb: 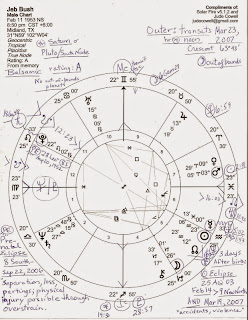 Note that power-mad Pluto creeps closer to his 4th house Chiron (the Plutocracy pair), plus, the current Jupiter Retrograde-Direct transit in Leo (Direct Station on April 8, 2015 @12Leo) conjoins his natal Pluto which accounts in large part for the huge increase in donations to his political campaign.