SCOTUS Obamacare ruling of 2015 and the January 2010 Solar Eclipse

An Eclipse in Capricorn: Sign of Law, Business, and Government

A past Solar Eclipse @25Cap01 in January 2010 in the 12 North Saros Series may be activated by the SCOTUS decision due in June 2015 concerning Obamacare (ACA) subsidies and the court's potential "gutting" (as the media call it) of the Affordable Care Act which will become unaffordable for millions of insured Americans if conservatives have their cantankerous way.

My post on the Solar Eclipse of January 15, 2010, the year President Obama signed the Act (a potential March 2010 signing of which I was only partially aware when the post was written and published--and not certain the bill would be signed at all) remarks upon the horoscope's emphasis upon 'health' (ex: asteroid Hygeia at Midheaven and apex of a YOD pattern--special task, turning point, or a crisis?) and the date's planets as they link in particular to America's natal Mercury in Cancer. You'll note a mention in Dane Rudhyar's explanation for '25Cap' of the term, 'baraka', a Sufi word, and the fact that this degree falls near US natal Pluto Rx (27Cap33 on July 4, 1776).

Recommended for updates and information on the King V. Burwell subsidy case against Obamacare: the SCOTUS Blog.

And if you wish, view my original text with horoscope of the January 15, 2010 Solar Eclipse or you may simply view the chart sans text here: 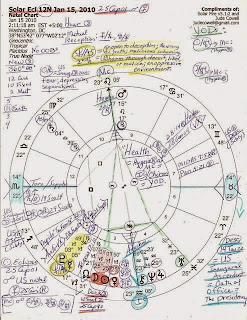