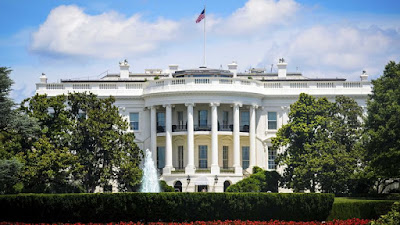 As you can see in the Autumn Equinox Horoscope 2015 set for this Wednesday September 23rd at the White House (above, as if you didn't know!) it's now time in the Jupiter-Neptune cycle for the Grand Spirit duo of planets to oppose one another after their three great conjunctions all through 2009, the first year of the Obama presidency.

Their three airy conjunctions manifested at 24-27 Aquarius directly upon US natal Moon (We the People) and this trio accounts for some of the dreaminess of 2009 as our 'rock star' president, who was early on awarded a Nobel Peace Prize for mere good intentions, dealt with the fraud and thievery left behind by the Bush-Cheney administration along with the threat of inflation, frothy market bubbles, and our inflated hopes, dreams, (self) deceptions and illusions that the Jupiter-Neptune combo tends to favor.

As you can't help but remember, the Bush years had peaked in a morass of speculation, waste, over spending, grand schemes and plans, wispy fantasies, over promising, over expansion, watery sentiments, religious flim flams, and the resulting disappointments, discontent, and sense of loss most of us felt as Jupiter-Neptune's overblown energies necessarily gave way to more practical, clear-eyed assessments, and Saturnian realism prevailed. 2005's Hurricane Katrina, certainly a Jupiter-Neptune event, brought transiting Saturn to George Bush's natal Ascendant and harsh criticism and accountability for his sorry response to its victims landed upon his neglectful doorstep.

Even political conflicts may be identified through the auspices of the Jupiter-Neptune pair of energies along with natural disasters involving Neptunian realms such as water, oceans, rivers, oil, gas, poisons, contamination--and scandals. Lots of scandals.

Their Conjunction Leads to Opposition

Now in 2015 into 2016, boundary breaker Jupiter and merging Neptune oppose one another across the Virgo-Pisces victim-savior axis and we find a culmination of their cycle, the current one of which began in 2009. Their opposition may be described as a Full Moon phase of awareness and fulfillment, and a high point for their faith vs reason energies. Of course, Saturnian boundary, border, wall, and fence issues are ongoing as refugees displaced by Bush-Cheney-Obama wars and destruction reap what profiteering warmongers have sown against the East and Neptune (planet of Islam) in its own watery sign of Pisces supports a massive, collective urge to merge, aided by massive Jupiter, ever hopeful for broad horizons and new vistas.

So if you're curious, here's a relic--a post written years ago concerning Financial Astrology and the Jupiter-Neptune-Moon Conjunction/s of 2009 (sans edits.)

Related: the horoscope of the Washington DC, the Federal City, with brief astro-notes added for the daring, and a 2011 post concerning and displaying the Natal Chart of Barack Obama, current occupant of the White House.