Having discovered an excellent article by Nina Gryphon concerning 2016's Jupiter-North Node conjunction in Virgo I recommend it highly for a good overview is provided of several areas some of which involve the Federal Reserve. Nina relates the conjunction/s in 2016 to the ending and beginning of a new fiscal era as it did in 1979 when the Fed changed its policy and a period of fluctuating rates and instability occurred. For as you know, Jupiter inflates, the North Node (NN) of the Moon is a Jupiterian point of encounter, contact, association, and direction and Mercury-ruled Virgo is a detail-oriented, discriminating Earth sign closely linked to the very creation of Washington DC.

But what areas are implicated by the Jupiter-NN combination in Politics?

As an actor, Jupiter can play many roles, four of which are politician, banker, guru (mentor, priest), and The General. All of these realms are subject to influence from the Jupiter-NN conjunction/s of 2016. And with 2016 an election year, we naturally think of the 2016 Campaign which is focused on the Republican and Democratic Conventions in July 2016, and the November 8, 2016 Presidential Election with Jupiter often used to signify one of America's two political parties. Which one? Which ever one is acting the Santa Claus role as the other party acts out the austere Grinch role. You know which is which these days based on their behaviors, right? So if I must, I'll gingerly reward the Jupiter-NN title to the Democratic Party for 2016. Actually the Jupiter-Saturn pair of energies is the 'checks and balances' duo, the way the US government is meant to work and be conducted but you know how that's been going lately--under constant threat of paralysis and shutdown thanks to anti-government types aiming for a 'new order' to replace the old order of 1776.

So as Nina Gryphon points out in her article, exact conjunctions of Jupiter and NN in 2016 occur on January 23, January 28, and June 20 @22Virgo in January and again in August--conjunct US natal Neptune @22Virgo making 2016 a year of fanaticism, paranoia, illusions, scandals, big dreams, promotion and pretense--quite descriptive of Campaign 2016. By June 20, transit Jupiter, after turning Direct in May, will reach 15Vir42, then conjoin US natal Neptune again in late July-early August 2016 suggesting that the themes will color the entire year and political campaign, and will necessarily involve the presidency of Barack Obama due to its inflated, fantasy-ridden Jupiter-Neptune imprint in 2009 via their three conjunctions through his first year in office, a major conjunction which conjoined US natal Moon (We the People). Obamacare and Wall Street are implicated as well.

And in Politics, the 'fortunate contacts' Jupiter-NN duo keys potentials in 2016 regarding: legal consequences of treaties (ex: TPP), legal opinions of religious leaders, and/or imports that disrupt trade or business (ex: TPP?). The interference in legal matters by religious leaders may be excessive, closed legal societies may be involved or turn up in the news, and/or our legal system will continue to be hampered and bound by erroneous decisions concerning the status of groups ('corporations are people'?) or parties (which hints at candidates illegally coordinating their campaigns and promotions with groups they shouldn't.)

Expansion of contacts through networking is a given along with successful meetings, and work/job related (Virgo) summits, conferences, and/or seminars which may be held in abundance and be successful as well. Political primaries and caucuses are on the 2016 menu, plus, The Broadcaster is one of Jupiter's roles and since North Node relates to contact with the public, we also think of Summer 2016 which threatens the American public with two political nominating conferences so it will be nearly impossible to escape hearing all about it. Too fast or far expansion is also a possibility for it may lead to future collapse so that would be a caution for anyone this applies to--the traditional caution of 'too much too soon' comes to mind.

During 2016 we must also consider that transiting NN (the head of the dragon) also meets with US natal Neptune (22Virgo) in 2016 and this combination may supply Neptunian glamour and/or falsehoods to our contacts but also such potentials as: a lack of community spirit or teamwork, bad judgment, disappointments in relationships or alliances, strange conduct, plus, it may widen the possibilities for anti-social behavior. Unfortunately, Neptune-NN also suggests scandals via foreign concerns, and spies and/or terrorists entering the country which of course points to the acceptance or non-acceptance of Syrian refugees and to America's ongoing arguments over Washington's neglect of adequate border control.

To close, let's add Ebertin's more pleasant descriptions of the Jupiter-NN combination of energies for he supplies more social and agreeable flavors such as: good fellowship, harmonious relationships, and good fortune in finding a partner (though anti-social conduct cannot be ruled out.) Another curious flavor comes from the 19th century and I wonder if you've ever heard of it: the Odyle force, sometimes referred to as the 'Od force' which sounds oddly quaint these days, doesn't it?

Well, why not check it out some brief details at Secret Moon Art? And here is a view of my Od Collage created in 2009 in honor of the 19th century's 'scientific' notion of the existence of an Odyle force: 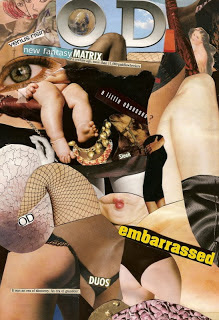 Blog Note: in planning stages is my annual post displaying the Spring Equinox 2016 and Summer Solstice 2016 horoscopes set for Washington DC so please check back when you can, or Follow or Subscribe as you may. Thanks!