The Full Moon @3Vir33 on February 22, 2016 has me thinking: did 1776 America 'peak' in December 2008? For that is when our nation's natal (birth) horoscope reached a Full Moon phase by progression with Sun @4Virgo10 and Moon @4Pisces10--less than one degree from the February 22nd Full Moon positions across the victim-savior Virgo-Pisces axis. Below is a version of the US SP (Secondary Progressed) horoscope as published to my WordPress blog back in the day. The chart is set for the moment of exact opposition between progressed Sun and Moon and issues from our July 4, 1776 5:10 pm LMT Philadelphia, PA natal chart: 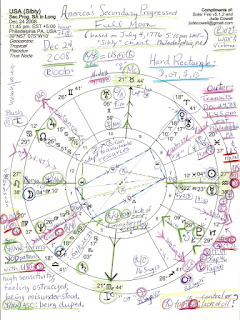 Please enlarge the image to read the messy scribbles!

You'll find details concerning this chart at Jude's Threshold, sans edits. Also from the site is a Banking Crisis Timeline where the closest event to December 24, 2008 is this entry: "American Express will get $3.39 Billion in TARP funds" dated December 23rd. And remember that the Great Heist itself and subsequent TARP give-aways were set up and perpetrated under George W. Bush, Jeb's brother.

Campaign 2016 Under a Virgo Full Moon

Now as you've noticed, the rhetoric of Campaign 2016 has included certain events that occurred during the 8 years of the Bush-Cheney presidency (or, regime, as some describe it) such as expansion of US war efforts and the stupidity of invading Iraq. The national debt limit may soon be a featured GOP talking point as 2016 proceeds, and yet, karma rides side saddle with December 2008 marking what some consider the crescendo of Financial Crash 2008 when the mask of disguise could no longer be worn by America.

As a blogging astrologer, I have used America's 2008 SP chart for such a timing purpose because SP Full Moons cosmically identify the external limits to which a person or entity may reach in the world given the capabilities they began with (the natal potential). If this is so for our nation, it seems that only the less prepared--the 99% of us--were deeply harmed by the crash and by what has turned out to be a continuance of Wall Street's fraudulent ways and now big banks are bigger than ever and home mortgages are being sold over radio and TV as if they're hot cakes--yours for the asking! But not so fast, for victimized Americans have traveled this rocky road to ruin before...

My thought is that although you can presume to cheat natural laws for a while, at some point karma--the law of reaping what was sown--will catch up with you. Even power elite manipulators and their cat's-paw politicians must learn this basic universal lesson in the end when all cosmic litter boxes shall be cleansed. Perhaps you disagree, but to me, Senator Bernie Sanders is the only 2016 candidate offering to wield a giant pooper scooper!

For after all, our symbolic SP Full Moon and the real-time Full Moon of February 22, 2016 fall across the victim-savior Virgo-Pisces axis and we may find again that various types of impure shenanigans are under our Piscean feet and may be revealed by the light of the February Full Moon.