Here is the Uranus Direct Station chart set for the White House; please enlarge to read my scribbles thereupon: 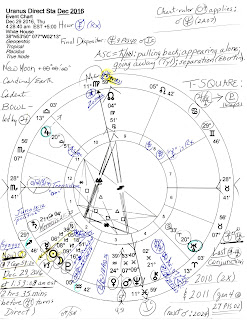 Now there are two particularly difficult stars attached to this transit chart: Zosma (victimization; ruthlessness) at MC and Facies, one of the most turbulent stars in the heavens (victimization, violence). Facies is spotlighted here by Mercury, Sun, and Moon and by the Syzygy New Moon @7Cap59 (see bottom, left) which perfected 2 hours 35 minutes prior to the turning of Uranus (this chart). The next Full Moon is on January 12, 2017 @22Can27.

A BOWL of Jupiter

This horoscope and event show a BOWL shape with Jupiter @20Lib51 (11th house) leading the other planets and ruling the 2nd house. Career and Public Status are highlighted by Jupiter (The General? the politician? the guru? the CEO?) as he approaches MC, Facies, and the current Solar Eclipse (PE) which occurred on September 1, 2016 in the 19 North Saros Series of realism and tackling the truth but unfortunately the 19N eclipse was opposed by deceptive Neptune (Campaign 2016; scandals; water disasters such as floods and toxins, and leaks of chemicals or of inconvenient info).

So as you see, the 2/8 money axis has 29 degrees on both cusps; 2nd cusp = "30Sag": "The Pope Blessing the Faithful," as I'm certain he does. Yet my suspicious nature feels a Vatican Bank hint coming on...or perhaps a Clinton Foundation scandal involving money laundering. But maybe that's just me--especially since economists and astrologers have been warning of a global financial collapse in 2016 or 2017 (plus, Shemitah!) so perhaps that's what shows in this Uranian transit chart for the end of 2016 into 2017.

Be that as it may, corporate expansionist Jupiter leads the throng here and rules 2nd house of Valuations, Earning Ability, Money, and Possessions and has links to the Federal Reserve System of banks since America's National Treasury is owned and operated by supranational bankers with their funny money scams.

Opposite, the 8th cusp isn't doing much better for it's ruled by retrograde Mercury which is too close to Facies for comfort. Plus, when in Capricorn, Mercury can easily exhibit a cunning, shrewd craftiness motivated by ambition. Whether Mercury expresses such traits or not, having critical-crisis 29th degrees on the 2/8 cusps indicates something on the cusp of change (but hopefully not collapse) in relation to quirky Uranus in Aries (Utopian zealots and anarchists--Ebertin) in the 5th house of Risk-Taking, Gambling, and Frivolous Pursuits. Something of that nature will now begin to 'move ahead' but jerkily because it's Uranus.

The Jupiter-Uranus opposition denotes a fulfillment, culmination, or extreme awareness of some kind relating back to that particular time period (2010/2011). My suspicion is that austerity measures are in the mix such as with the 'Sequestration' cuts implemented by the so-called 'Super Congress' which is described by the Solar Eclipse of November 25, 2011 @2Sag in the 14 North Saros Series as bringing a peculiar turn of events and that is just the kind of 'turn' that suits eccentric, erratic Uranus, the Disruptor.

In closing, and since this is a Political Astrology post, let's consider the Cardinal T-Square formed (though not perfected) by Jupiter-Uranus pointing toward wealthy manipulator and fearmonger Pluto with a paraphrase of Michael Munkasey's Midpoints: Unleashing the Power of the Planets which includes Politics and Business potentials and follows the Hegelian Dialect method of social chaos and control.

Jupiter-Uranus = Pluto: Thesis: legal methods applied against a breakdown in order; revolutions or strikes; growth after reforms. Antithesis: religious principles spur reforms; governments that allow no modern reforms; civil war or unrest due to a legal or religious system that stifles justice for common people.

Here America's two-tiered justice system is spotlighted with apex Pluto in a Cardinal T-Square suggesting potentials for explosive endings and/or active confrontations of overwhelming force in order to deal with crises.

And speaking of mysterious plutonian wealth hoarders, here's a Recommended Video: Meet the House of Rothschild.