Recent political developments in the US inspired a look at the first 6 months of planetary transits to the Inauguration 2017 horoscope. This resulted in slight amazement at how many transits offer frustration and delay for the White House. Perhaps you are not surprised, dear reader, since recent news reports contain only partial success for Mr. Trump's and Mr. Bannon's policies such as banning visitors to the US from Muslim countries (though not the ones that participated in the attacks of 9/11). When the outcry was more than the White House anticipated, an attempt was made to blame President Obama's previous list of nations but that ploy isn't working very well either for the amateurish crowd now mishandling the White House.

But whether or not you agree that Mr. Trump and his minions are 'mishandling' our government, the 2017 planets in their courses are objectively showing a picture of frustration and a stalling of the administration's dearest objectives with only partial success at best. So by the time of a major signpost, when the Sun opposes Inauguration 2017 Sun, aka, POTUS, will plans and aims progress for the White House and thus for the nation?

Here's a bi-wheel with the Inauguration 2017 horoscope inside and transits for July 23, 2017 set for 8:08:40 am edt, the moment the Sun @00Leo49:53 opposes the POTUS Sun (00AQ49:53) in what some call an 'un-birthday'. If you enlarge the chart perhaps my scribbles will become legible for almost everything I wish to say about the matter is squished upon the chart including the primary point about an un-birthday: time to measure progress or the lack of it; unfavorable for ego-related pursuits (such as those driven by ego); reassess priorities and change course, if necessary: 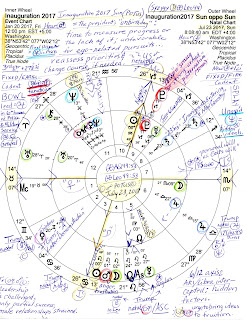 Outside the chart/s are penned Mr. Trump's natal planets, plus, the Solar Eclipses of September 1, 2016 (9Vir21) and February 26, 2017 (8Pis12) are added. Actually, transit Saturn in Sagittarius squaring Inauguration 2017 Mars (24Pis21) is quite enough to block, restrict, or delay initiatives and skew their plans. Calm persistence and patience (not Mr. Trump's best qualities with natal Mars rising with royal Regulus in vain Leo) are the keys to success. However, this Saturn-Square-Mars transit perfects three times in 2017--once already on January 29th, again on June 17th, and finally on October 29, 2017 so frustration is in effect the entire year. (Of course, other transits aid or deny POTUS plans as well but that's a post of a thousand words so let's not for now.)

Now Mr. Trump's 'first 100 days' ends on April 29th (or the 30th at noon, the way I count it) so that has become an important presidential benchmark since the days of FDR. When I looked at transits of that day there's a Lunar Return to the New Moon in Gemini which timed Mr. Trump's announcement of a White House run in June 2015 (as he descended from on high in Trump Tower to speak before a paid audience). Shortly before 9:00 pm on April 29, 2017, Luna sails across the 00Cancer Cardinal World Point of manifestation which creates two Sun-Moon blends of cosmic weather for April 29, 2017: Sun Taurus-Moon Gemini (dusty Earth-Air) and Sun Taurus-Moon Cancer (muddy Earth-Water). For comparison's sake, here are the Images for Integration for both blends which may or may not relate to the condition of Mr. Trump's administration after its first 100 days:

So apparently by the end of April we'll have fluffy souffles and/or the angry swan of the Cygnus constellation. Well, I don't know about you but I'm not certain which, if any, to cheer for.