On February 11, 2017 I posted a video segment of Thom Hartmann discussing the Reichstag Fire that was used to boost Hitler's rise to power, plus, the unsettling correlations of the 1933 event and the un-mandated installment of Mr. Donald John Trump in the White House (with his sidekick, dodgy Steve Bannon, Aryan promoter extraordinaire).

The Reichstag Fire of February 27, 1933 is detailed on the Eye Witness to History website if you're curious about what was done and said that night by those on the scene (who were secretly responsible for setting it). As you see, the date of the event reveals that its Solar Return 2017 occurs a few days from this typing--and a day or less (depending on your time zone) after the February 26, 2017 Solar Eclipse, a karma-laden affair. Such cosmic time links are worth remembering if Trump and colleagues find a more applicable 'Reichstag Fire' (or, another 9/11) than they have so far.

For you see, spokeswoman Kellyanne Conway's imaginary Bowling Green massacre never happened so the administration had to nix that as their Muslim-bashing smokescreen for who-knows-what reforms they intend to perpetrate, if allowed. Calling out their cow pucky must be done as loudly as possible and of course ridicule and mockery are always useful against fools who take themselves so very seriously while they wreck people's lives and sabotage governments.

Related is a previous post displaying the Fascism Rising Solar Eclipse of February 24, 1933, a mere three days prior to the Fire started via arson which Hitler blamed on his opponents, the Communists, and then used the fire as 'justification' for the events and forced changes that came after. Curiously, the 1933 eclipse was in secretive, karmic Pisces (5:29) as is the upcoming Solar Eclipse on February 26th (8Pis12). Karma, the universal principle of reaping what was sown, is on the cosmic menu these days but with this much Pisces and the sign's own Neptune active as it floats through its favorite sign, humanity seems to be at loose ends when it comes to figuring out how to handle hidden karma, some of which has yet to be revealed. Perhaps this is where the old hindsight is twenty-twenty can come in--after the fact and once it's too late--and after another false flag op has flown. With incendiaries in the White House, what are our chances?

And so I post the following chart for those who may wish to keep tabs on transits to it and its progressions for I don't always have time to do so myself. The chart is set for February 27, 1933 9:45 pm using the coordinates of the Reichstag Building, Berlin, Germany; it's an Hour of an unaspected Saturn in Aquarius and a will that's out of control: 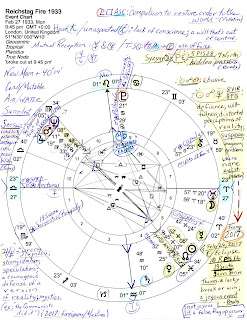 Please enlarge chart to read my notes and you may agree that the parts written on the right that are highlighted in bright yellow just may apply to Mr. Trump, his minions, and backers (foreign as they may be). The activation of the Reichstag Fire chart which describes Hitler's false flag operation with its Sun @8Pis52 is a possibility though not necessarily on the date of the upcoming Solar Eclipse (February 26th) but potentials will be strongest within about 6 months afterward. No, Sun positions are not considered karmic or fated, if memory serves. But then we have the The Great American Solar Eclipse on August 21, 2017 @29Leo which will be visible across our nation from Oregon to South Carolina (where succession began).

Just the fact that Mr. Trump slogans at us with the word 'great' ad nauseum is enough to bother, if not worry me, how about you? A coincidence? Well, at 29 Leo the eclipse does hit Mr. Trump's natal Ascendant and is close to his rising Mars @27Leo, as well. Hmm. Therefore, its solar influence may be on a personal and/or ego level for Mr. Trump. Proud Leo, you know. Natural leader.

Additionally, the 1933 event's Solar Return for 2017 basically is the Solar Eclipse and look what we have in the White House--people with huge egos like our tweeter-in-chief and Mr. Bannon who are desperate for an excuse to enforce (more) unconstitutional laws and orders upon our nation, to weed out the undesirables (their opinion), 'greatly' enlarge the US military, cut benefits for people who actually need them, ruin what little health insurance we have, and bring on another world war as if Global Government is what the world needs more of. As you know, a 'new world order' was the goal of Adolf, too. Here's a previously posted video Germania: Hitler's Vision of World Government that you might want to check out. Astro-Notes concerning his Death Horoscope are included.

Herr Hitler and His Minions, Plus the Reichstag Fire

And if you're curious, here is a bi-wheel of Hitler's natal horoscope with the Reichstag Fire chart around it; actually, the Fire's planets conjoining his natal midpoint pictures tell an interesting tale, if you care to look: 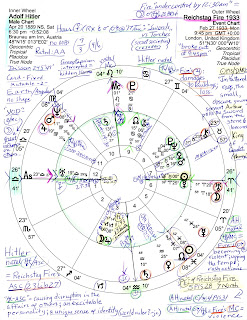 As you see, the violent Marseillaise Trio of Neptune, Mars, and Jupiter is active as during the French Revolution, and there are indications of the occult, secret societies, and crusaders contained in various factors such as: Pluto conjunct Pollux, Jupiter/Chiron = Pluto, idealistic Jupiter-Neptune = mystics and visionaries and the wrong diagnosis which is what the Nazis gave for the arsonists who were themselves. Hidden karmic factors are shown by the security axis of Cancer-Capricorn intercepted in the philosophical 3/9 polarity, and priestly Chiron @23Tau57 exactly conjoins Hitler's natal 8th cusp, the house of The Occult and of Death. The fire was "under control" by 12:30 am and the Trio were at Midheaven (The Goal Point) so we see: Jupiter-Neptune = MC: visionaries, fortune-hunters, speculators, wastrels, spendthrifts, and squanderers (Ebertin).

Let's close with a view of the intriguing natal horoscope of the Third Reich dated January 30, 1933 11:15 am CET Berlin, Germany. Data source is the historical record and Nick Campion's The Book of World Horoscopes, chart #128. You'll see virtually the same position for Chiron which is rising and Rx in the chart (The Quest; the Great Guru (Nolle); wounding, blind spot, mysticism, mentoring) and is part of a KITE pattern with power grabber Pluto conjunct IC as the nose and Venus @19Cap as the Kite's tail. And Chiron rising? Going a very long way in an attempt to force a mentor's value judgments on others (Nolle) which aligns with Venusian concerns and pagan worship.

How curious that Mars-rising mogul Trump sees himself in a similar fashion--as something of a 'Great Guru' (aka, a materialistic Jupiterian) who's all about money and gold and loves to say, "You're fired!" Now surely that wouldn't be Reichstag Fired, would it?