The following Full Moon horoscope is set for the White House and shows that North Node (a point of encounter and future direction) points to Mr. Trump's natal Mars, planet of aggression, there's a dynamic T-Square from the Full Moon to the delusional 8th house Neptune in mid-Pisces (conjoining fixed star Achernar = crisis; risk of rapid endings), the 8th house of Corporatism, Credit, Debt, Insurance, and Transformation also contains the currently reigning Solar Eclipse in Pisces which manifested @8Pis12 on February 26, 2017, US natal Chiron conjoins the goal-oriented Midheaven (21Aries: "A Pugilist Enters the Ring"), stationing Jupiter is in 3rd house as is Mr. Trump's *natal Jupiter which was Station Direct at his birth, Venus and Uranus are in the 10th house of Public Reputation suggesting the potential for lack of resources and/or erratic or eccentric spending, the Full Moon conjoins authoritarian Saturn, and the Gemini-Sagittarius planets are intercepted across the 5/11 Will axis suggesting something hidden, secretive, and/or karmic is afoot.

Please enlarge the chart if you wish to read my scribbles: 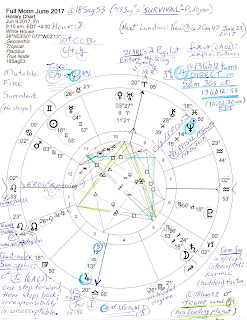 This Full Moon horoscope's ASC-DESC house cusps are in the same signs as those of Mr. Trump's natal horoscope (though in earlier degrees) and the June Full Moon echoes his own natal Sun Gem-Moon Sag opposition (his natal chart is linked, below). The Sun to his natal Uranus transit denotes a brief period when group organizing is difficult due to issues of disloyalty, unreliability, and/or stubborn pride, non-traditional solutions and methods are sought (pretty much his modus operandi), and Mr. Trump's uniqueness and unpredictability are singled out to receive more attention than usual (which is hard to imagine how much more he could receive--and we could tolerate).

Of course, this Full Moon in freedom-loving Sagittarius, the natural sign of Jupiter, so perhaps its perfection denotes a sort of culmination, fulfillment, or an ending of political alliances.

Now as you know, astrological Jupiter can play many roles (exs: broadcaster, CEO, banker, financier, guru, actor, politician, the General) and once the Great Benefic of Good Fortune begins to move forward, Jupiterian matters in legal, diplomatic, political, religious, and financial realms will progress as well though this shall be more obvious once transit Jupiter leaves his own shadow at the degree of his last Retrograde Station (February 6, 2017 @23Lib08). Will generous, jolly Jupiter's forward movement aid a grumpy Congress in their careful deliberations? What careful deliberations?!

Tragically, the US Congress seldom if ever engages in such exalted non-partisan activities these days since the majority of them serve corporate interests rather than The People's.

But wait! According to some folk, the US Constitution was suspended in 1933 by FDR and every emergency act signed by presidents ever since have continued the tragic illusion:

Well, bless my habeus corpus! From 1996, here's a nuanced look at the issue of our suspended Constitution and the invoking of presidential Emergency Powers. Now I wonder why presidents continue to take their Oaths of Office to defend and protect a suspended document with provisions so often ignored? Probably to keep the ruse of a constitutional Republic intact and the wool pulled firmly over our eyes.