This morning on Capitol Hill, and during a Dark of the Moon phase when operating in secrecy is a given, senate Republicans revealed their healthcare bill, their answer to a promised repeal and replacement of what they've famously termed 'Obamacare'. Under a changeable Gemini Moon (and with Gemini's ruler Mercury, plus, Mars in Cancer, out-of-bounds and writing and doing who-knows-what), today's senate bill is not yet in its final form.

Like the previously passed House 'healthcare' bill, the senate version may be meaner than ill Americans, those in nursing homes (there thanks to Medicaid), and others need it to be..."mean, mean', mean" was Mr. Trump's recent description of the House bill. Now he says he wants the senate bill to have "heart". Well, with tomorrow's New Moon in its own sign of Cancer (care, nurturing, security, family) perhaps this will be the case. Or not. For the June 23rd New Moon conjoins a money planet--America's natal Venus.

Set for Washington DC, here's a horoscope of the June 23, 2017 New Moon @2Can47 which perfects at 10:30:38 pm edt. Please enlarge to read my study notes if you wish for as you see, the 5th house of Gambling, Creativity, and Children and the 6th house of Health and Services are emphasized. Outside the chart I've highlighted in red the US planets most affected by this New Moon which is symbolically imprinted upon the Republicans' healthcare bill, no matter its final form.

The natal US planets in Cancer notated in the chart are: Venus, Jupiter, and the Sun (POTUS); neglected is US natal Mercury Rx in the New Moon's 6th house, an indicator of thinking and talking about health matters: 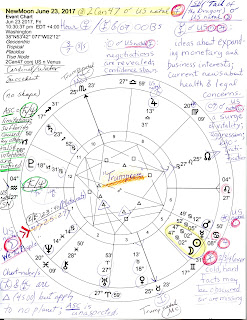 Descriptively, the transiting Saturn-Neptune midpoint (sick, poor, weak people) rises at the New Moon's Ascendant (4AQ27) along with America's natal South Node (6AQ) and this gives a midpoint picture of limitations, suffering caused by others, and false intentions being noticed. I believe that false intentions are at the "heart" of the bill since the legislation's true motive has been recognized from the beginning as a massive tax break for the wealthy class while taking away health care and insurance from those in need (which is where the suffering and potential cases of death come in--the final bill may include financial give-aways to the States whose politicians can then decide whether or not to fund Medicaid!)

And as you've probably noticed, in recent years there have been various ways in which the wealthy and corporate classes have abandoned America a la 'Ayn Randism'--the Republican 'healthcare' bill (aka, 'Trumpcare') is simply the most recent example. Ayn Rand's cold 'survival of the fittest' mindset has no room for the sick, elderly, or disabled--even though Rand herself received benefits in her old age!

Another cosmic hint as to Trumpcare's true motives: the transiting South Node of the Moon--aka, the Tail of the Dragon, now swipes the US natal Moon (We The People) suggesting separation and loss and a lose-lose outcome for us. We see and feel the humanitarianism and equality of our natal Moon sign, Aquarius, disrespected as we're tossed under the corporate bus of Plutocracy and 'economic royalists' as the transiting degree of Plutocracy's favorite midpoint (Pluto-Chiron @23AQ40) is now poised to overwhelm and oppress US natal Moon.

Now there are more chart factors worthy of study in the June 2017 New Moon chart but a steady down pour has just started here north of Atlanta, GA so I'll close this particular fuss and get back with ya later!

A Related Post with Video from March 2017: Trump & Paul Ryan Team Up to Make Healthcare Bill Even Worse.