September 2017's Dark of the Moon shades a UN Address by Mr. Trump

Today, during the three days leading up to the Virgo New Moon of September 20, 2017 (1:30 am edt) @27Vir27--the 'dark of the Moon' phase when sneaky doings often occur--Donald Trump has met and spoken with UN members--chastising them as expected. However, his first Address to the UN General Assembly is scheduled for Tuesday, September 19th when the gathered members will be able to take 'his measure'. Naturally, mention of the nuclear capabilities and intentions of North Korea will be a primary item on Trump's agenda along with his ideas for reforming the UN.

An astrological tidbit concerning Mr. Trump's appearance at the UN this week involves the Sabian Symbol for the September 20th 2017 New Moon degree (27Vir27), a word picture which may well describe a certain mogul playing acting a presidential role though of course you are welcome to disagree...

"A Bald-Headed Man Dominates a Gathering of National Figures"...'Keyword: DOMINANCE...positive expression: accomplishment through a completeness of self-mastery and a rigid control of others; negative (shadow/unconscious side): a sadistic sophistication'. Of course, inter-national figures will also be in attendance. And Virgo is the sign of The Critic.

Now Trump's level of self-mastery is uncertain, if it exists, but it or its lack will be with him at the podium, one imagines.

Well, it is a darkened Moon so perhaps the degree's Illumination Point (opposite) can shed a ray of light upon the situation:

"A Fertile Garden Under a Full Moon"...'Keyword: ULTIMACY...positive expression: high reward in worldly goods and exceptional integrity in using them; negative side: irritating pride of possessions.' (The Sabian Symbols in Astrology, Marc Edmund Jones.)

Now 'exceptional integrity'? Hmm. Not so much. And 'irritating pride of possessions'? I'd have to say The Gilded One has got that firmly covered! It only remains to be seen how ruffled and fretful or how soothed and at ease his audience will be when Donald Trump is done pontificating at them. If his nagging includes whining that would definitely be irritating to most, if not everyone.

My suspicion is that the fulfillment/culmination stage of the September New Moon arriving in two weeks with the Full Moon of October 5, 2017 @12Ari43, a critical degree ('13Aries' = "An Unsuccessful Bomb Explosion"!!), will reveal how the September seeds Mr. Trump plants this week are sprouting--vigorously in receptive soil, or meagerly in the soil of the world's discontent. 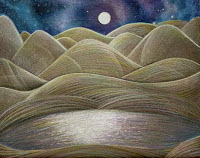 No, I have never posted the natal horoscope of North Korea but I did list its natal data and planets here where you can see that NK's natal Saturn was eclipsed by the 1 North August 21, 2017 Total Solar Eclipse @29Leo which also happens to be the natal Ascendant of Donald Trump--and about 4 degrees from his rising Mars, planet of quarrels, conflict, and war.