September 17, 2017: In a 10-part, 18-hour documentary, the Vietnam War receives the Ken Burns and Lynn Novick treatment beginning tonight on PBS. Below is the horoscope for the start of the Vietnam War set for the alleged assault (pretext) of the second Gulf of Tonkin incident. The resolution giving President Johnson authority for use of force was voted on in Congress and passed the House by a vote of 416 - 0 and the Senate 88 - 2.

The two senators who voted against the Gulf of Tonkin Resolution were Wayne Morse and Alaska's Ernest Groenig. "When the resolution passed, Morse declared that Congress had surrendered its authority, and therefore the authority of the people it was elected to serve. Morse also deplored the open-ended nature of the approval and condemned Congress for giving the President and the military a “blank check” which would be cashed with taxpayer’s money and citizens’ lives."

And as my generation has known for decades, Senator Morse was all too correct, wasn't he? For more info, see The Wayne Morse Center. And here's another source of information on the Vietnam War.

So here is the Vietnam War horoscope set for August 4, 1964 at 21:30 -7:00 (9:30 pm USZ6 -7:00) at Vinh, Vietnam, the naval base from which the alleged assault on a US ship was launched. Please enlarge to read chart notes which include an unaspected Jupiter (Jupiter The General, large amounts of money, financiers, politicians, etc). The Great Benefic's unaspected condition denotes those who are disconnected from moral or religious standards, live an 'Ivory tower' existence, but are zealous toward the matters of Jupiter's house--here, the 2nd house of Money and, in the US, our National Treasury, from which the funds for weapons and war issued, thanks to US taxpayers (see Senator Morse's statement, above). 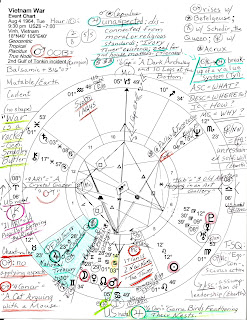 When North Vietnamese troops entered Saigon, capital of South Vietnam, on April 30, 1975, the Vietnam War came to an end. On that date, Venus @19Gemini27 was unaspected, a 'wallflower' condition for the usually sociable Venus. This condition of Venus suggests unusual perspectives, sporadic or unrestrained expressions, and an obsessive single-mindedness. Another April 30, 1975 cosmic condition of interest is karmic Saturn @13Can54 conjunct US natal Sun (POTUS = Nixon). This repressive transit indicates a time of disappointment, discouragement, and resentment toward limitations, rules, and regulations. It marks a period when past mistakes must be corrected so that moving forward is possible, aka, making karmic progress.

Tragically, through subsequent wars and their flimsy pretexts, Congress' continued negligence of its war-declaration duties and shady money management, Pentagon and CIA shadow activities, fear-mongering propaganda against We The People, and Washington's obvious plundering and global conquest obsessions, we see that 'the powers that think they be' (Max Igan's phrase) continue their Ivory Tower existences while perverting the course of our nation as 'global cop' and lining their pockets via several means including the racket that is war.

Besides the Vietnam War's Jupiter in a Money house (and fraudulent Neptune in the 8th house of Corporations and Big Business), note that the IC (Foundation, Basis, the HOW? point, The Drain) of the war chart reveals, as you see, America's natal Jupiter @6Cancer: "Game Birds Feathering Their Nests" (Jones).

2 New North: Collapse of 'The Tower'

One more prominent chart factor to note is the Prenatal Solar Eclipse (PE) series under which this particular hell of war was unleashed, the 2 New North, which manifested @17Cancer27 (4th house) on July 9, 1964. Themes of 2 New North, also called 'The Tower' (see Tarot card #16) are: changes of direction, sudden collapse of plans, lifestyles, and/or an existing structure; confusion reigns but after the dust settles, reshaping and rebuilding have far-reaching effects (Predictive Astrology, B.Brady).

The last occurrence of 2 New North was @8Leo on July 31, 2000 (not quite 9/11's PE, but obviously still of influence). The next occurrence is @19Leo on August 11, 2018; 19Leo is a sensitized degree from the King of Alarm Solar Eclipse of August 11, 1999, aka, the 'Nostradamus Eclipse' with its mid-degreed Fixed Grand Cross as described in the Scriptures' Book of Revelation. And on 9/11/01, transiting Venus activated the 19Leo degree and thus 1999's King of Alarm Eclipse.