March 18, 2018: here is a view of the Aries Ingress (Spring Equinox) horoscope of March 19, 1776 (Sun to Aries Point) which shows a New Moon @1Aries ("A Woman Has Risen from the Ocean, a Seal Is Embracing Her"), and marks the beginning of a new cycle of activity and, as we know, heralds the founding of a new nation in 1776--order out of chaos. As you see, the midpoint of the revolutionary pair, Uranus and Pluto conjoins the Sun-Moon midpoint. Uranus-Pluto denotes the "collapse of the old order, construction of the new" and "revolution" (Ebertin).

The Sun Aries-Moon Aries combo? Mavericks and crusaders! Saturn exalted in Libra and rising? Difficulties at the beginning but ideals will be put into a proper form with laws for guidance. 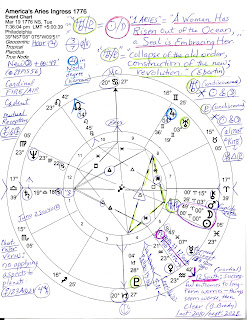 Of course, 'a woman rising from the ocean' hints at a newly invented America and her founding motto, E pluribus unum, 'out of the many, one' and the 'seal' refers to America's Great Seal with its Illuminati symbols as accepted by the era's enlightened thinkers determined on the betterment of society (Sun sextile Uranus). These were our nation's Founding Fathers whose contrary ideals inspired them to become advocates for the common man (Sun sextile Pluto). To me the fact that Uranus, Neptune, and Pluto were not yet discovered in 1776 is of little if any consequence since a Neptune-Pluto trine was above their heads and denotes those who can respond to the invisible realms and forces whether they are aware of it or not!

So when looking at transits to America's natal horoscope (of which there are many versions set for various hours on July 4, 1776), this cosmically timed Aries Ingress 1776 chart is an alternative and may be a chart to keep in mind.

Here's Part One of The Story of America's Great Seal.