The Progressed New Moons of Trump and Bolton

Below is a dual image of the Secondary Progressed (SP) New Moons of both Donald Trump (lower left) and John Bolton (upper right). Trump SP New Moon we've discussed here previously and since Trump's natal chart is apparently accurately timed (birth data, below), the date of Trump's SP New Moon is assumed to be accurate.

John Bolton's lack of a correct birth time is more problematic when attempting to assess his progressed planets--the SP New Moon you see here issues from a 'noon' natal horoscope--and the SP New Moon's degree for Mr. Bolton is the same (8AQ52) for all three 'natal' charts I've progressed for this post--setting his natal chart for 12:00 am gives an SP New Moon on October 16, 2018 while 11:59 pm gives October 17, 2017. As noted, a natal chart set for 12:00 noon results in an SP New Moon on April 16, 2018, as you see. And since Mr. Bolton is scheduled to take over the position of National Security Adviser for Donald Trump on April 9, 2018 (last I heard), I'm choosing the 12:00 pm natal chart to calculate Bolton's SP New Moon, symbolically the beginning of a new cycle of life as will be his new White House job (if nothing goes wrong): 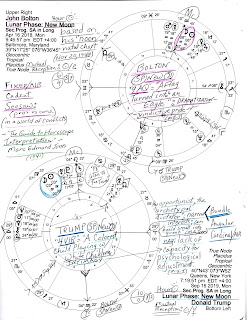 As you know, the timing of an SP New Moon denotes that one has been living previously within a darkened Balsamic Lunar Phase of endings, partings, and things going bump in the night, and may time a period when secrets abound. A good example of this phase and its effects is Donald Trump who was 'elected' during the phase and began his White House tenure under it. Balsamic phases are not favored periods during which to begin a new phase of life or a new project or job as we've seen with the many departures and endings of his alliances and relationships since he entered Politics. It's also a period of life when someone cannot carry on and another must take the reins in one's stead. If this can be applied to a previous president's term ending and a new fellow moving in, then there we go--Trump in the White House.

Otherwise, the constant hints or threats of VP Mike Pence taking over the POTUS helm could be part of this Dark of the Moon time which will symbolically come to a close on September 16, 2019 with Trump's SP New Moon @3Virgo12. For a view of the SP New Moon chart you see here along with the chart of the beginning of Trump's Balsamic Phase in April 2016, try this previous post. Of course, with SP New Moons, it takes time before the new life phase and its new themes become apparent to the individual as the lunar light symbolically brightens toward the culmination of an SP Full Moon.

Rounded up, the Sabian Symbol for Trump's SP New Moon '4Virgo' seems applicable to his concerns: "A Colored Child Playing with White Children." Now this doesn't mean that Trump is a colored child (though he behaves like a pouting little man-baby) but it does reveal a particular issue he must deal with at this time of life, and of course, the suggestion of racism and bigotry tend to be on his menu. The Keyword for '4Virgo' is: INTIMACY...and its negative expression = lack of capacity for psychological adjustment. I think most if not all people have given up hope that Trump can or will choose to change his behavior to any appreciable amount.

As for Mr. Bolton (whenever his SP New Moon perfects), his SP New Moon's rounded-up degree is '9AQ": "A Flag Turned Into an Eagle.". The Keyword for '9AQ" is: DRAMATIZATION...negative expression = vindictive pride. For Mr. Bolton, the Balsamic Lunar Phase holds true since he's stepping into the White House position left open by Trump's recent ouster of General McMaster (though I must confess that 'vindictive pride' sounds very much like Donald Trump's behavior). Plus, that Bolton may also be in a Balsamic Phase bodes ill for his new position lasting.

A further comparison may be made via the shapes of the planets in the SP charts: Trump's SP planets form a BUNDLE denoting an opportunist and archetypal dictator with narrow interests, one who can build the small into the great (which includes a tendency to turn mountains into molehills--and to build towers, one supposes). Supporting the Balsamic endings vibe is Trump's SP Saturn conjunct SP Midheaven which can be a potential marker for a fall from grace if conditions are right and other chart factors and transits concur. There certainly are those working against him to facilitate such an outcome to Trump's political career.

(Note that the natal chart of Benito Mussolini contains a BUNDLE shape of the archetypal dictator--at least, that's how Benny chose to use those particular energies.)

John Bolton's SP New Moon is a different tale for his SP planets form a SEESAW shape denoting one who constantly weighs pros vs cons, works mentally within polarities, and sees the world as full of conflicts. Bolton's natal Mars-Uranus opposition supports such a world view but unfortunately it does so on a grand and explosive scale and may be used by Mr. Trump to 'justify' war maneuvers and further power and territory grabs.