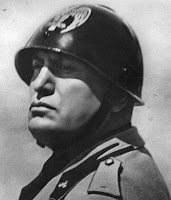 March 23, 2018: 99 years ago today, Italian dictator Benito Mussolini founded the ring-wing Fascist Party as 'Fasci di Combattimento' ('Fighting Bands') based on the struggles of 19th century Italian peasants. Advocates of Italian nationalism and wearing black shirts as uniforms, Mussolini began a campaign of terror and intimidation against his leftist opponents.

Here is a list of the applicable Solar Eclipses and their themes which influenced the Fascist timeline of events:

Besides the disruptive actions and nationalist rhetoric of Donald Trump, it's no wonder that a 'history rhymes' time link between Trump, Mussolini, and Hitler has been effortlessly easy for most people to realize whether they wanted to or not.

And to me it seems that the one useful thing Mussolini provided the world is a clear equation which keeps on giving--in our day through the machinations of Donald J. Trump and his wealthy corporate backers and political operatives:

And I suppose that since the above Solar Eclipses repeated during the tenure of the more popular and more like-able Barack Obama (2009, 2012, 2015) we must toss his presidential actions and rhetoric into the same barrel with Mussolini-Hitler-Trump. For after all, that's what America's much-touted 'pass the baton' really means--the same old empire-building regime and agenda merely with a new hand on the White House helm. And tragically for the entire world, that's how the 'death star' Pentagon's US war machine bombs on and pilfers all our money and resources.