Trump and Mercer and the 2018 Summer Eclipses

March 25, 2018: With communicator Mercury now retrograde, a review of videos on the topic of svengali-esque Trump-funder and social recluse Robert 'Bob' Mercer (Renaissance Technologies) and/or daughter Rebekah is actually quite easy to accomplish these days especially since the Cambridge Analytica scandal surfaced into mainstream awareness (and Mercer's funding of it, Breitbart News, Bannon, Conway, Cruz, Trump, etc.)

In one such video posted to YouTube on October 24, 2017, Seth Myers, in one of his The Check In segments, discusses Mercer and his far-right government-hating agenda, and more. Billionaire Mercer's aim is to reduce the US government to the size of a pinhead and he wants "it all to fall down" which perked up my ears since Robert Mercer's Prenatal Solar Eclipse in the 2 New North Saros Series repeats on August 11, 2018 @18Leo41 as The Tower Solar Eclipse for its themes of 'collapse of an existing structure or lifestyle' and the 'rebuilding that begins once the dust settles' (paraphrasing Brady's Predictive Astrology.)

What we can't know ahead of time is whether 'the tower that collapses' refers to the Washington establishment, Trump--his towers and administration, a Wall Street casino crash (where Mercer has worked as a hedge fund manager), the Mercer-Bannon-Trump campaign to destroy our nation, or all such possibilities during the season of influence of the 2 New North eclipse. It seems that all these potential scenarios have been set up by one group of actors or another but which one or ones will be triggered into reality by external events in the form of planetary transits and progressions? Will outcomes be determined by which event occurs first and either swoops the others along or perhaps makes any one of the possibilities moot?

My previous thoughts before today have been that The Tower Solar Eclipse relates closely to financial events, in part because of certain US economic conditions brewing in recent years (exs: 2017's massive GOP tax cuts for the wealthy, and Trump's ill-considered trade wars), plus, because of two eclipse-related conditions--that Donald Trump's PE (2 Old North) repeats on July 13, 2018 @20Can41 (chart w details will soon be posted here--stay tuned) and the initial manifestation of Robert Mercer's PE (2 New North) which first manifested on June 17, 1928 @26Gemini during the run-up period prior to the Crash of 1929 (aka, 'Black Tuesday'--a noon horoscope is shown with destructive if wealthy Pluto @20Cancer where Trump's July 13, 2018 Solar Eclipse @20Can41 will 'hit' and thus will be made stronger as it activates the difficult fixed star Castor, one of the dark-light Gemini Twins with potentials for: sudden fame or loss, murder, crippling of limbs, and/or mental illness (A. Louis). Of course, Castor and his twin, Pollux, are also creative stars particularly in the form of writing so journalistic input such as publishing about the potentials just listed will surely be a factor.

Now it's true that both Summer 2018 Solar Eclipses are partial and so are not as strongly influential upon events or people as they could be. However, between them a Total Lunar Eclipse occurs and perhaps that is where most of the secrets lie--and will be revealed. Below is the DC horoscope of the Lunar eclipse of July 27, 2018 @4AQ44 (near US natal SN) with my usual messy notes penned on. The chart is packed full of details with potentials for: strong emotions (furious outbursts), challenges to authority (Trump, Mueller, Putin, or other?), rash actions, even violent measures which, if taken, will result in severe karmic consequences. As you see marked in blue is Mercury Rx, unaspected, and ruler of 7th and 10th houses. Mercury unaspected suggests someone Mercurial who's isolated and/or hyperactive (Mercurial Trump the tweeter? Don jr in hiding?) and it looks as if retaliation is upcoming (trade wars?) via asteroid Tisiphone conjunct North Node. 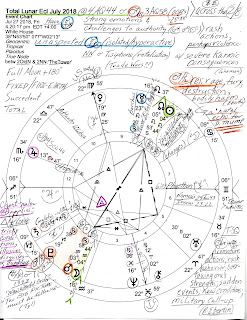 As you see, it's an Hour of changeable Mercury Rx with chart-ruler Jupiter in Scorpio making only one Ptolemaic applying aspect, a trine to Neptune Rx in its own sign of shady Pisces. This applying aspect denotes that tricky conditions will continue or worsen, illusions and delusions will continue to abound, disguises are worn or attempted, and/or someone benefits from a run of 'dumb luck'. What I didn't add on the chart is the typical Jupiter-Neptune speculation which implicates the stock market and the usual tendencies toward over-promises, grand gestures, bubbles, and/or get-rich-quick and other schemes. Caution is advised! This eclipse affects the 2/8 money axis which can also tag sexual, corporate, or other antics now ripe for spotlights and the revelations uncovered by the 2018 Summer Eclipses.

Now attractive Venus at Midheaven suggests that critical perspectives and more modest values may be desired yet with US natal Neptune (22Vir25) at Lunar Eclipse Midheaven, the deluded/deluding conditions mentioned above may be already in play and too ingrained for much improvement from valuable Venus (possible currency wars too?). Of course, the exalted position in the chart of Venus in Mercury-ruled Virgo, sign of the virgin, may also be pointing directly toward Trump's ongoing scandals with the ladies--or perhaps another public figure's sexy behavior or finances will become public fodder for the media (MC). Either way, legalities will ensue with Venus in 9th house and more indictments or trials may occur. We should also note that 22Virgo+ is the degree of golfer Donald Trump's natal 2nd cusp, a money house--and he does love to spend (waste) large amounts of taxpayer money on vacation get-aways.

Then cosmically speaking, there's the 'natal echo' in the chart via one of Trump's natal midpoint pictures repeated here by transit--marked in orange, upper right, and posited in 2nd house is Mars-Saturn = Pluto: rage, fury, destruction, bodily harm--and what there was no space to write--brutality, all potentials compliments of Reinhold Ebertin

The last chart factor I want to mention in the Lunar Eclipse chart is a dynamic T-Square between the challenge-prone Sun-Mars opposition and quirky Uranus in money sign Taurus (in 5th house of Speculation) which forms a midpoint picture of potentials for: premature action, rash behavior, over-taxing of strength, sudden events, new conditions, and/or military call-up as in times of war--or in times when an Oval Office occupant needs more 'soldiers' in the war he wages on whomever or whatever gets in his way. And synchronistically enough, the July 27, 2018 Lunar Eclipse @4AQ44 falls within Mr. Trump's natal 6th house of Military, Police, and Civil Service.