Now that Trump Campaign contacts and meetings during the Republican National Convention in July 2016 with Russian agents such as Sergei Kislyac are in the news I've been reviewing (under Mercury retrograde) previous posts from that time. Comparisons with the horoscope of the RNC Full Moon of July 19, 2016 and the (noon) natal charts of Paul Manafort and current AG Jeff Sessions have proven somewhat enlightening, and of course, Mr. Trump's timed natal horoscope deserved a look as well. Apparently, foreign operative Mr. Manafort joined the Trump Campaign in order to direct or manage the GOP's 2016 Convention.

Regarding Kislyac see Russian ambassador won't name all the Trump officials he's met with because 'the list is so long'. 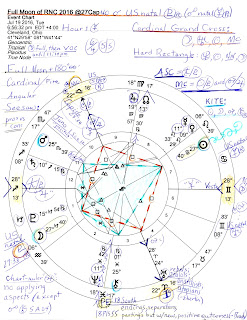 As you see, Trump's natal Libra trio of Neptune-Chiron-Jupiter is at MC, the Goal Point, and radical chaos-creator Uranus is at IC, the Foundation of the chart. The power-hungry Sun-Pluto midpoint is at MC, an obvious picture of power grabbing and an obsession with ruling over overs. Mars-Jupiter is at MC as well indicating an ability to make favorable arrangements and a love of 'enterprise' (such as selling out America to Russia, privatizing every public program they can for private profit, running government via bribes, favors and pay-offs, and turning the Oval Office into Trump's personal piggy bank?)

My original post concerning this horoscope with chart details (sans edits) may be found here.

Trump's natal planets have a few links to the RNC 2016 chart. These include 2016 Uranus in Aries square natal Saturn in Cancer: others pose threats to his 'authority', new ideas or methods challenge traditions (I'll say!); 2016 Pluto opposes n Mercury in Cancer: opinions being forced upon him (many have tried!); 2016 Saturn 10Sag15 Rx inconjunct n Mercury: adjustments to his thinking and planning (intimidation and bribery can do that); 2016 North Node in Virgo square n Uranus (Trump's guiding planet of chaos and disruption): dealings and/or meetings with rigid characters. A compromised Donald Trump remains obvious to me if not you.

RNC 2016 links to Sessions' natal planets include: 2016 Neptune square n Mercury: open to deception in communications; info is not what it appears to be (an echo of Trump's problematic natal Mercury-Neptune square of lies and fantasy--you'll recall that Jeff Sessions lied to Congress about his meetings with Russians); 2016 Jupiter in Virgo (conjunct the North Node of meetings and encounters) square n Mercury: speaking or acting before thinking, taking rash actions; 2016 Pluto possibly conjunct n Moon in Capricorn: threats, intimidation, secrets? Perhaps a threat of sexual secrets revealed unless..?

RNC 2016 links to Manafort's planets include: 2016 Full Moon conjunct n Jupiter (28Cap37) which of course means that Manafort's n Jupiter conjoins US n Pluto--political ambitions expand and financial rewards accrue or are promised, along with a general Moon-Pluto influence of obsession with mishandling of resources (Jupiter), criminality, and manipulations concerning war/s and weaponry, plus, a potential for secrets to be revealed which suggests intimidation and threats--as in, an offer Manafort couldn't refuse--even if he'd wanted to. Personally I have to include the Republican Party within such negotiations with Russia but disagree if you must. Another link that relates to meetings is natal NN @25Aries conjoined by 2016 Uranus denotes meetings or encounters with unorthodox people and zealots (Uranus in Aries) within the realms of radical politics (Uranus-NN).

RNC 2016: Monday July 18th 12:00 am: the Moon begins @4Cap28 (Sun 25Can57) giving the public at home and in the audience a serious tone of ambition and practicality with duties taken seriously (Capricorn is the sign of government, law, and business; tribal Cancer denotes home but also business); a Moon-Saturn tone indicates that some frigidity of feeling may be in evidence, if not onstage or in the audience, then behind the curtain. Monday July 18th also contains a Moon-Pluto flavor as the Moon conjoins transit Pluto at 9:24 pm (15Cap56). In Politics, a Moon-Pluto signature describes potentials for the misuse of resources in business and/or political activities, and/or campaign promises concerning the use of the military and/or police, plus, underworld criminal elements such as mobsters, fraud, waste, women's issues, and/or hidden wealth (Munkasey); (Cowell).

Actually, across the Cancer-Capricorn security axis, a doubling of Moon-Pluto vibes occurs on July 19th for a Full Moon @27Cap40 perfects and conjoins US natal Pluto (27Cap33) suggesting potentials for military and/or police involvement during the convention (or rhetoric about such topics), violence and/or criminal behavior, terrorism, paid protesters disrupting events, intense emotions such as rage or jealousy, hurled insults, hidden string-pulling, mass media and a very large amount of publicity. (Moon-Pluto = public relations; mass propaganda; a need for power.) Plus, with Moon-Pluto, a 'demanding tyrant' may be on the scene. This is supported by transit Pluto in Saturn-ruled Capricorn which can express as The Dictator (Ebertin).

That the Full Moon's Sun opposes US natal Pluto @27Cap33 (and US SP Pluto @29Cap, a critical degree) hints at what we know to be the case: major power plays are in progress. The July 19th Full Moon may potentially reveal secrets much as a Lunar Eclipse can do and may involve the Pentagon and/or may place plutocrats (Pluto) in the public spotlight, and highlight misogyny, point to abortion issues, and/or uncover past abuses of women. Simultaneously, transit Pluto squares US natal Saturn (14Lib48), a time when motives must be aboveboard, and restriction and criticism occur due to our government's ruthless abuse of power and authority.

Pluto of the Underworld: totem planet of Secret Agents and Global Mobsters Everywhere

Now in 2018, with what we know so far from the Mueller investigation, it turns out that perhaps the 'demanding tyrant' on the RNC scene in 2016 represents Vladimir Putin and his agent Kislyac even more than it describes a subservient Donald Trump, now appearing in his role of US President.