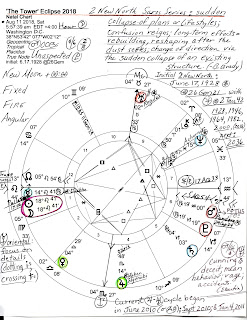 Perfection occurs at 5:57:39 am edt during a Moon Hour (fluctuations, changes, instability) with Mercury Rx @14Leo41 rising as oriental planet (rising last before the Sun) which suggests an emphasis or focus on details such as dotting Is and crossing Ts.

Quite a bit of information is smooshed upon the chart and may be readable if the image is enlarged. Included is the theme of this eclipse in the 2 New North Saros Series: 'collapse of an existing structure; confusions reigns; long-term rebuilding after the dust settles; far-reaching effects; new directions' (Predictive Astrology, B. Brady). The initial 2NN eclipse manifested on June 17, 1928 @26Gem21 with Jupiter @2Tau42 so this chart's Uranus @2Tau33 Rx performs a belated transit to 1928 Jupiter (in the eclipse's lead up to the Great Depression) indicating support for the eclipse theme of 'new directions' along with expansion in such areas as political and/or religious affiliations, freedom and independence issues, and intellectual growth.

As for the rising Solar Eclipse itself, obviously it keys the King of Alarm (or, Terror) Solar Eclipse by degree for that particular August 11, 1999 Solar Eclipse manifested in the 1 North Saros Series as The Mother of All Eclipses--just as did The Great American Eclipse of August 21, 2017 @29Leo (conjunct Mr. Trump's natal Ascendant). Typically, a process is described here for 1 North naturally leads to 1 South, and so on...here we see 2 New North in all its formidable cosmic splendor and not-so-subtly pointing toward the August 1999 Solar Eclipse (of the Book of Revelation and Nostradamus fame) with its Fixed Grand Cross in the mid-degrees of the Fixed signs, Taurus, Leo, Scorpio, and Aquarius: 'Points' of the Oxen, Lion, Eagle, and Angel--described as the angels letting go the winds of war. And imho, they certainly did.

So what to expect from the August 2018 Solar Eclipse? Well, chart-ruler Sun makes no applying Ptolemaic aspects to give us hints of what's to come--unless we wish to count as a major aspect a quincunx to powerful Pluto in the Military-Police-Civil Service sector, the 6th house, suggesting those who take on responsibilities that they end up resenting. Obsessed with gaining the approval of others, a Sun-Pluto inconjunct hints at tense conflicts with others (The Generals/6th house?) and a preoccupation with power and position. Wonder who this describes?

And while we're on the topic of Pluto and obscure aspects not readily seen, there's a 'hidden square' (255/56 degrees) between creepy wealth-hoarder Pluto and values-oriented Venus, also a planet of perspective, alliance, and diplomacy. This background influence suggests the patronizing of others and conflicts in relationships (probably over currency evaluation and/or finances in general) and it's a curious one since Pluto is officially 'unaspected' in the chart, a condition which denotes isolationists, those 'overshadowed by shadows', and off-on spurts of overwhelming, compulsive desire (for total control, it seems, with Pluto in Saturn-ruled Capricorn). Always a loner, unaspected Pluto is so self-contained that astrological Pluto's important regenerative qualities are prevented or withheld from aiding the other planets (actors; forces) in the chart making objective analysis impossible and the spiraling plutonic darkness ever darker.

Also note that the military-and-weapons-infused Mars-North Node pair point toward MC and disruptive Uranus denoting interrupted meetings, upsets in a community or an organization, or possibly cooperative teamwork. Another midpoint picture stands out and is penned on the chart, lower right: Mars-Uranus = Neptune which hints at potentials for cunning, deceit, mean behavior, rage, and/or accidents and injuries (Ebertin; Munkasey). And of course, the Mars-Uranus duo when combined is a weapons-guns-sharp-instrument significator as well.

That these factors and the August 11, 2018 Solar Eclipse relate to such forces in the US as the 'Deep State', America's hidden or invisible government (a natal Neptune-Saturn signature at our nation's founding), and the Plutocracy that has overtaken our Republic, I have no doubt. For the oppression, racism, and other mankind-stomping programs, plans, and -isms of the Pluto-Chiron pair continue to bedevil us with renewed vigor since the Pluto-Chiron cycle began in November 1999--conjunct US natal Ascendant @12Sagittarius:

"A Flag That Turns into an Eagle That Crows," a degree and symbol that have brought our country much in the way of its negative (unconscious/shadow side) expression of idle prejudices and unsubstantiated claims. Oh, and that's Mr. Trump's natal Pluto (10Leo02) rising between Mercury and North Node indicating potentials for 'suspicions about leakages through spies; provocative data; removing' (deleting) 'massive amounts of data through groups of closely working companions' (ex: the White House); 'taking drastic measures to present ideas'. (Midpoints: Unleashing the Power of the Planets, Michael Munkasey.)

Yet the Sabian Symbols for the 2NN Solar Eclipse and the related Illumination Points should be considered as well so here are the M.E. Jones analyses of the karmic confrontation degree and the actual degree of the August 2018 Solar Eclipse (the position in the Zodiac where the 'cosmic blink' occurs--again!) along with each degree's Illumination Point which is opposite and unconscious:

'18Leo' = "A Teacher of Chemistry"...keyword: INSTRUCTION; positive expression: exceptional self-confidence and a delight in subjecting all experience to the test of immediate application; negative/unconscious/shadow side expression: unintelligent dependence on supposition or rules of the book.

'19Leo' = "A Houseboat Party"...keyword: CONGENIALITY; positive: a gracious eagerness of participation in the more worthwhile or enduring aspects of human affairs; negative: thoughtless self-indulgence and contempt for the general welfare.

Illumination Point '19AQ' = "A Forest Fire Quenched"...keyword: CONCERN; positive: special skill in bringing personal interests to some larger point of effectiveness; negative: a fear of experience and a subtle delight in calamity.

Well, such as it is, there's my preliminary analysis of the 2 New North Solar Eclipse of August 11, 2018 and its potential influence upon our nation's capital and people. Of course, many other chart factors will affect conditions then and presently unknown events will occur so perhaps we shall discuss such cosmic topics more fully as the hour of solar-lunar perfection draws near and this particular 'wild card of the Universe' manifests in royal Leo, sign of ego, pride, vainglory, and leadership.