Transits to the Natal Planets of Robert Mueller

Born August 7, 1944 in Manhattan, NYC, New York, a basic biography of Robert Mueller is available at Wikipedia if you're curious. And if you check it out, get ready to read a long list of medals awarded him for his bravery during the Vietnam War! 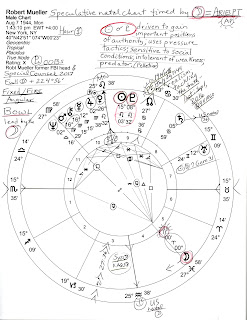 Obviously Mr Mueller was born with Sun in Leo, a proud sign that encompasses lawyers as well as thespians, teachers, and 'natural leaders'. His natal Moon on that date ranges from 21Pis29 (secretive, compassionate Pisces) to 6Ari18 (Mars-ruled Aries, sign of the pioneer, fighter, and activist) for we do not know his birth time. Naturally, the Cardinal World Point of 00Aries00, the Aries Point, is within natal Luna's range and denotes public recognition, fame, fortune, publicity, and/or activity on the World Stage--thus, the speculative horoscope you see here.

Currently, transit Neptune in Pisces opposes natal Mercury (12Virgo) bringing misunderstandings, confusion, and a potential for error and deceit (or, can indicate his work with people of deceit). It's a period of difficulty for making sense of facts and figures, fanaticism and paranoia may be evident, goals are elusive, and people may disappear (Paul Manafort a flight risk?)

November 2017 also brings a square from transit Jupiter to natal Pluto, a 'goals thwarted' transit that has been afflicting the natal Pluto (10Leo02) of Donald Trump as well. However, Mueller's Jupiter-square-Pluto transit is only one 'hit' on November 18th while Trump's has continued.

In December 2017, transit Jupiter squares Mueller's natal Sun in mid-Leo denoting a phase of 'going over the top' when chasing goals due in part to ego expansion; this is the first of three squares with December 21st the first target date.

January 2018 brings Mr. Mueller a Saturn-square-natal-Neptune (2Lib15) transit of confusion, lethargy, and possible depression; this is a 'once only' transit when withdrawal from the battle field is possible--will his 'Russia Gate' investigation be wrapped up by or around then? Transit North Node (public contact; future direction) conjoins natal Sun on or about January 18, 2018--a public announcement of some kind?

February 12, 2018 brings transit Saturn opposing natal Saturn (5Cancer--conjunct US natal Jupiter), a time when there may be regret over past actions and a demand to correct their consequences; any rewards result in more responsibility, and one reaps what's been sown (karma).

Then, beginning in June 2018, there are 5 'hits' that extend into 2020 from transit Neptune in Pisces (edit: opposing!) natal Mars (16Virgo--Mars conjunct natal Chiron, denoting the 'sacred warrior' archetype of the more bullheaded among us.) This is a difficult transit of unreasonable or misguided ideals and actions and he may be vulnerable to issues of mistrust, deception, and/or scandal. Legal and business transactions are not favored and relationships with males may suffer; energy depletion is a potential. Another possibility is loss of job, position, or status as an authority (April 2019 edit: Mr. Mueller submitted his report to AG Barr March 22, 2019). If Mr. Mueller can hang on to his reputation during this time period he'll be doing well under this difficult transit. The Neptune-opposing-natal-Mars dates (based on a speculative natal chart so the dates may be off by a day or so--this is a general guide) are:

Please note that this particular transit list is only partial and does not include the more positive contacts from transiting planets to natal planets.