Did the Helsinki 'Summit' Get Most People's Attention Finally?

This may be significant: assuming that we can depend on Sabian Symbols to have meaning in and for the Collective, the difficult August 11, 2018 Solar Eclipse @19Leo opposes by degree and sign (Leo-AQ) what at the time I was prone to calling, The Unmasking Eclipse because it manifested in the 10 North series on February 7, 2008 @18AQ, the "A Man Unmasked" degree.

Naturally, the year '2008' is well known for America's world-shaking financial collapse and subsequent heist but that's not the topic of this post. The symbol for '18 Aquarius' as described by Dane Rudhyar and Marc Edmund Jones is the topic for its themes resemble current events and are being triggered via opposition from the August 2018 eclipse @19Leo. In a comparison of the two eclipse charts there are many more planetary and cyclic factors involved, of course, but here's the gist of '18AQ" in relation to Donald Trump being unmasked as the __, a __, or the __ (fill in the blank) we didn't want in the White House even as Mr. Putin is now unmasked as Trump's handler, or, as some would reluctantly say, his boss: 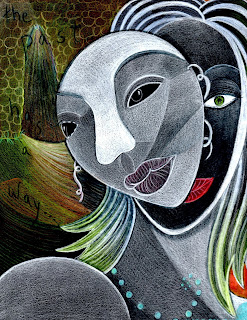 "Keynote: The difficulty for the modern individual to keep secret his private past or his deeper motives." This symbol may also "refer to the publicizing of past behavior" and it mentions "innumerable governmental agencies " that are "nearly always able to find access to remains or records of past actions..." Sounds like serenades by old-baggage-handling Trump, KGB-er Putin, and embarrassing Kremlin intel with shades of Michael Cohen's years' worth of records haunting around the edges. And toss in the 'Trump tariffs and trade wars' that, eyed clearly, seem to be intended for the purposes of losing American jobs and crashing the US economy, a further weakening of our nation at Putin's direction--in retaliation for the Fall of the Soviet Union (1991--over-confidently billed as the "End of Communism").

This symbol "demands that each person make a public accounting of himself whenever the general welfare requires it. Life becomes a laboratory for an immortal curiosity. Keyword: ANALYSIS." Positive expression: "a considered self-dedication to greater and more wonderful reasons for being"; negative/unconscious/shadow side: "self-betrayal through exceptional ineptitude." (My italics and bolds.)

Public accounting? Long overdue, including Trump's tax returns, but perhaps Mr. Mueller can help us with that. General welfare? Naturally, We The People value it but a mask-free Trump now informs us that he prefers Russia over America, so if confronted he'll probably pretend not to have heard of the concept nor will he respond to the shouted question!

Above image: The Past Has a Way, another pencil drawing by Jude Cowell.