Winter Solstice 2012, a YOD Pattern, and Fated Encounters at Vertex for Mr. Trump

The well-publicized cosmic event of Winter Solstice 2012 presented us with a horoscope that cannot be forgotten for its configurations but also because the date times the ends of, or shifts in, various calendars and is said to symbolically spotlight a turning point for humanity. With its potentials of a 'turning point' or 'crossroads', the starkest figure within the 2012 chart is a YOD pattern with a Saturn-Pluto sextile at its base pointing like a 'Finger of God' toward Jupiter Rx @8Gem54 in 6th house (chart set for the White House Washington DC). And it's 8-8-8 degrees all around for this heavy weight trio of planets whose influences naturally continued into 2013 and beyond. Mr. Barack Obama was playing the presidential role then as you'll remember and, in the exalted realms of archetypes, representing many-armed Siva (Shiva), god of creation and destruction. Chilling. And for some crazy reason its statue is displayed near the Hadron Collider, a dangerous machine if there ever was one. 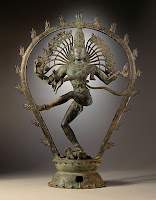 Yet after enduring almost two years of a Trump White House, Mr. Obama is being praised even by some conservatives like Max Boot who writes the He Would Take Obama Back in a Nanosecond. Well, I'd be there with ya, Mr. Boot, to welcome him back to the White House ('the people's house' and not Putin's playground!)

And perhaps it isn't significant but the Winter Solstice 2012 YOD pattern with the Saturn-Pluto sextile at its base points to 2012 Jupiter, as noted, but also to the Prenatal Solar Eclipse degree of Donald Trump in the 2 Old North series which just repeated @20Cancer41--onJuly 12 while he was overseas wilting next to Putin! 'Unfortunate news' is one of the potentials of a 2 Old North eclipse and there was certainly a huge amount of it attached to Trump's 'summit' with Vladimir Putin, especially upon Trump's return to US shores, and the criticism reverberates as I type 5 days later (hence Max Boot's op-ed linked above!)

Of course, Trump's PE of 1946 @9Gemini conjoins America's natal Uranus (8Gem55) so we can substitute Uranus for 2012 Jupiter in the formula and we have potentials for: Saturn-Pluto = US n Uranus: sudden changes or upsets in plans that concern important activities; reforms in the way punishment is given for important crimes; the erratic or uneven use of retaliatory measures (M. Munkasey). Noel Tyl adds some disturbing possibilities that deserve their own paragraph:

2012 Saturn-Pluto = 2012 Jupiter: trouble with authority; adoption of the austere; staying out of trouble; trying to save what's left. And with US Uranus: ~brutal efforts to start a new order~; an attack, regardless of potential losses. Of course, it took 'brutal efforts' back in Revolutionary days to establish our nation but that's actually the trouble--too many 'bosses in their own minds' think it's time for the 'new order' of 1776 to give way to a newer order which, they think, must be preceded by chaos--and they have Donald Trump as chaos agent for that. This Trumpian chaos creation reminds me too well of the themes of The Tower Solar Eclipse of August 11, 2018 upcoming--and he's known for his love of tower-building and for plastering his name all over them, the better to fall.

Now it's true that the Saturn-Pluto pairing is problematic for its cruelty, brutality, rage, fury of destruction, and a potential for hardship which sounds rather like Siva in destruction mode with the creative mode in regression. And most readers of my astro-blabs are well aware that the Saturn-Pluto cycle of about 33 years' duration begins anew on January 12, 2020 when the old man and the saboteur precisely conjoin one time only @22Cap43--conjunct the natal Vertex (Point of Fated Encounter) of Donald Trump (22:46)! Of course, both planets link to the devil and Hades but that's a post of a different hue.

Whether Trump meets with Saturn and Pluto or he forces their combined energies onto others is unknown to yours truly since Astrology's AC-DC currents can direct in either direction depending, or can denote alternating energies. But I do know that it should be one but may turn out to be the other. Fate is fickle that way yet karma always rolls around, no matter the level of a person's wealth and privilege. Is Mr. Trump destined (Vertex) to encounter Saturn-Pluto's strength and harshness or rule with it? Already the Cager of Children has shown signs of harshness and cruelty which would be most unfortunate for the entire world. And as you know, Trump admires aloud such harsh traits in other despots and longs for their type of 'independence' to act. Well, a Saturn-Pluto sextile suggests control issues on its own, and involves power and the withholding of information in order to retain it. Sounds rather like Putin holding something over Trump's head, doesn't it? Perhaps hotel tapes, money laundering crimes, or whatever? Even worse may be imagined since we don't actually know!

Then to the Saturn-Pluto conjunction we should add Nicholas de Vore's symbol for the degree of '23 Capricorn' (rounded up) where they meet on January 12, 2020 and we have an appropriate symbol of "governmental authority" which makes me wonder if Donald Trump will wield it--or by then will governmental authority finally catch up with his wayward ways and snatch him sideways?