Election 2020 and a Farewell to Bretton Woods!

Friday July 13, 2018: Predictions are being made concerning the 2020 Election, one such that both Republicans and Democrats should be worried but for different reasons. To me it seems more a case that the American people should be worried with little respite proffered between now and then as 'the old order' collapses into 'the new'. Anyway, below is a bi-wheel of Election Day 2020 (November 3) both charts set for Washington DC. Inner chart = 12:00 am est; outer chart = 11:59 pm est so we can view the entire planetary panoply from beginning to end of the 24-hour period: 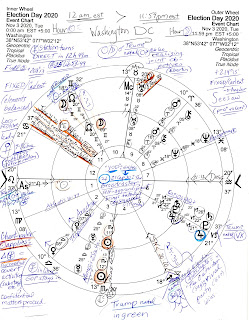 Now many things including loyalties will shift before November 3, 2020 so I won't type much on this chart today though a few factors should be mentioned, such as:

12:00 am est, an Hour of the Sun becomes an Hour of the Moon (changes, fluctuations, publicity) by 11:59 pm est. With Leo rising, Chart-ruler Sun makes only one applying Ptolemaic aspect in the chart, a trine to Neptune (18Pis20 Rx) which benefits covert activities (exs: sabotage; foreign agents infiltrating; spies that harm national security, cyber warfare) and implies the smooth proceeding of confidential matters, plus, a certain sense of glamour (Neptune) is cast upon leadership (Sun) with a bunch of Neptunian propaganda and lies to go with it.

Highlighted in orange is the Election's Prenatal Solar Eclipse (11th house) which perfects at Summer Solstice 2020 @00Can21 in the 4 North Saros Series of illusions, restraints (on voters?), misjudgments (of voters?), and separations. (This eclipse hints at a major post coming asap!) The election's Syzygy Moon (last lunation prior to Nov 3, 2020) is a Full Moon and is entered in 9th house @8Tau38--conjunct radical Uranus Rx at the Halloween Full Moon! Of course, Full and New Moons can act at times as if they are eclipses in a disruptive Uranian fashion, revealing secrets left and right (Full Moons: lunar eclipses, New Moons: solar eclipses) so we'll probably have some interesting tidbits, secrets, news, and gossip surface pre-Election under its rays of awareness and culmination--finances and investment are involved most likely with a Taurus Full Moon though issues concerning the environment, agriculture, and project development can be expected.

As for the Election Day 2020 chart we find 'voting' Mercury strong at Direct Station @25Libra55 in 3rd house (25Libra = cusp of the 17th Lunar Mansion, a critical degree). So it appears that by Election Day 2020, reassessing the then-current crop of politicians (such as they are!) has been completed and votes have been cast (assuming a sure-to-be-rigged election is held at all).

So who do the planets in this Election Day 2020 horoscope favor?

Going by the Venus Cycle upon which US Presidential Elections are based (those smarty pants Venus-worshiping Founders of ours--or was it Mason FDR when he changed the ceremony to January 20?), 2020 Venus in Libra indicates that the same party will remain in power, in the White House at least. Of course, how things will proceed after the 2020 Election must depend in large part on the results of the November 6, 2018 Midterms with its difficult Prenatal Solar Eclipse, The Tower @18Leo41 (rising in the charts you see here!)

Yes, the old order is collapsing (or is being collapsed by social tinkerers who think they know better--with buddies Trump and Putin as front-men) but be that as it may or may not be, the Election 2020 horoscope shows Trump's natal planets all over it--you see many of his planets marked in green--plus, on Election Day Trump will be in process of having a Nodal Return! If he's still around, that is. (The mean ones always seem to live forever, don't they?) Well, he didn't win the popular vote in 2016 (No Mandate from The People) but pretends he did--and the global imperative in 2020 remains 'the big picture must be followed, very little option to do otherwise' - 1993 Uranus-Neptune = tr Pluto, (Tyl) = "POLITICAL POWER...smug or strong-armed paternalism" (The Sabian Symbols in Astrology, Jones). And a cherry on top of this authoritarian dictator mess: America's first-ever Pluto Return approaches in 2022. Follow the link to view our Pluto Return's Prenatal Eclipse chart.

Well, that's all I'll agree to type for now on the topic of Election 2020 but if you daringly wish for an inkling concerning DC conditions and events in the run-up year of 2019 you may wish to try a previous post showing horoscopes of Spring Equinox and Summer Solstice 2019. Or not.

Even so, your Shares and Comments are always much appreciated! jc

Do you give private political readings ?

Look, Jude, I just want to say one thing: You recently posted something here about a certain star in the Heavens always determining the outcome of a presidential election, that favors the Trump administration "winning", yet again. Can no longer find it here, but in consideration of that, why not close down this astrological soap opera and retire to Florida? Sorry to be sarcastic, but I was really bummed and frankly disillusioned by the entire site when I read it.

Matt I can think of no star that determines an election outcome so perhaps you refer to the Venus Cycle (Venus' morning star/evening star positions) which according to master astrologer Bernadette Brady gives clues as to whether the incumbent party retains the White House or the rival party. My post explaining more about this (US presidents serve for 4 or 8 years typically which relates to the cycle of planet Venus) is found under 'Venus Cycle' and is linked in the post you've commented on although as Brady points out there have been a couple of exceptions. I have related the exceptions to the distinct possibility that cheating occurs and skews outcomes which is again possible in 2020.

Sounds as if you're projecting your frustration with Trump on to me but I assure you this nearly 14-year project of mine will not be shut down for a Florida retirement! jc