August 22, 2018: In my last post we made note of yesterday's legal matters in the Manafort and Cohen cases and the fact that August 21, 2018 was the day of the first Solar Return to the horoscope of The Great American Eclipse of 2017 @29Leo which 'eclipsed' the natal Ascendant of Donald Trump. And of course, eclipses that conjoin fixed stars tend to activate the gifts or cautions of said star--in this case, royal Regulus which rises in Trump's natal chart. In a sense, he is Regulus.

So on the day that transit Saturn, authority and legal eagle that he is, turns direct and begins moving forward, transit Mercury @00Vir38 conjoins Regulus in the 12th house of Politics, Back Room Deals, Secret Enemies, and Karma, as you see in the following DC Horoscope: 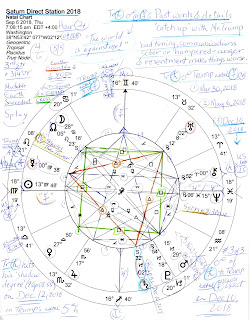 Legal matters should move ahead once Saturn turns Direct yet the karmic planet won't reach his shadow degree where he turned Rx on April 17, 2018 (9Cap08:55) until December 12, 2018 (see chart, lower left). Two days prior (December 10, 2018), transit Saturn makes his third of three oppositions to Mr. Trump's natal Mercury (8Can51) as notated on the chart, lower right and upper right, in blue. Unfortunately, loss-bringer Saturn, when in his own sign of Capricorn, isn't positive for finances or the economy so there could be forward movement in those departments as well with negativity suggested.

These Saturnian oppositions to Trump's natal Mercury began on March 30, 2018 with the second exact opposition May 6, 2018 as listed, chart right. Therefore, Saturn is in process of winding up review mode during which he's been getting his facts lined up (on both sides--Trump's and Mueller's) yet we may not see major developments in the RussiaGate inquiry until December 12, 2018 or just before or after. That's unless Saturn's case is strong enough and helpful witnesses have cooperated to fill in the gaps in the case/s so that the report from Mr. Mueller that we're all waiting for can be finalized around September 6, 2018 or during the month (pre-Midterms 2018!) then perhaps the report will be publicly revealed by December 2018 whether Mr. Trump's 'interview' with Mr. Mueller is accomplished or not. If Trump is deposed, there's no telling how matters will develop...or how they will blow up in his red face.

Actually, transit Saturn opposing Trump's natal Mercury is only part of his ongoing Saturnian troubles because he was born with a fact-challenged Mercury-Neptune square. Here's a previous post with a list of Saturn's affects on both planets in the square and the dates of exactitude when influences are strongest.

As for chart-ruler Mercury in its own sign of Virgo (also ruler of the MC, The Goal Point), two applying Ptolemaic aspects are shown: Mercury trine Uranus in Taurus (1A34; organized groups, beneficial info arrives, larger social and/or tech issues on the menu) and Mercury trine Saturn (1A54; support from authority figures, practical solutions are found). As you see, these three form an Earth Grand Trine, a soothing indicator of protection, stability, persistence, and endurance, yet negatively, 'stuck in a rut' may also describe this conservative, common-sense, routine-loving pattern which tends to shrewdly evaluate matters before making important moves.

Now there are multiple factors worth noting in the chart other than the ones noted, above, such as Denebola rising (to go against society), planetary patterns (2 YODs, a Grand Cross), house ruler-ships, a Syzygy Moon in early Pisces (August 26th Full Moon), the Solar Eclipse in force ('The Tower' @18Leo41), the stressed out Sun-Neptune opposition square MC with royal Rigel upon it (to bring knowledge to others), and more. Please enlarge the image to read a few basic notes, aka, my messy scribbles. jc

Very Much Related: Will Regulus Assure the Destiny of Donald Trump?