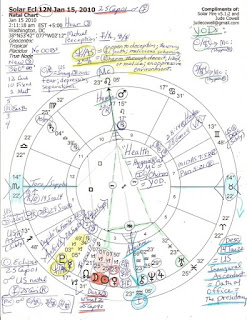 Image: Horoscope of the last manifestation of a 12 North Solar Eclipse on January 25, 2010 @25Capricorn.

August 16, 2018: If you haven't you may wish to view the natal horoscope of Omarosa Manigault Newman (RR: AA) who was born February 5, 1974 at 10:54 pm edt in Youngstown, Ohio with Sun @16AQ56, Moon @4Leo52, and Ascendant 6Lib54--with Pluto Rx and rising @6Lib36. This and other factors gives her a 'Trumpian' need for taking revenge against those who hurt or injure her in any way (Moon-Neptune = Pluto) and an ability to see through other people (Moon-Neptune = ASC).

Her powerful natal Pluto and ASC are also involved in a YOD pattern, an indicator of crisis, a special task, a spiritual opportunity, and/or a turning point or crossroads situation coming along in her life at some point. How she handles the situation or opportunity is her choice and it now seems we're seeing her handle--and best--Donald Trump and her firing from the White House (December 2017) with her book release and the outing of secret tapes she recorded while in the White House. Trump trained her on The Apprentice and Omarosa learned well enough to use his vengeful tactics against him now and she is aided by inherent plutonian abilities as noted, above. And her YOD pattern between Pluto in Libra sextile Moon in Leo points toward natal Mercury @4Pis35 (5th house), planet of communications, messages, news, and gossip! Through the YOD, Omarosa 'yields a powerful influence on the public through speaking or writing' (Moon-Pluto = Mercury--Ebertin). And yes, a Moon-Pluto sextile does have a tendency to hold grudges (Epstein) and attracts the same!

Yet this post isn't about her natal horoscope as a whole but concerns today's position of transit Saturn @3Cap53 which impels this Capricorn to post a bit concerning Omarosa's Prenatal Solar Eclipse (PE) for the planet of facts, truth, accountability, responsibility, and commitment activates her PE (3Cap40) which perfected on December 24, 1973 in the 12 North Saros Series. This manifestation in the 12 North series was only an annular eclipse (not as strong as a Total) yet had an especially long duration: 12 minutes 03 seconds. The last manifestation of a 12 North eclipse is seen above in its horoscope set for Washington DC during the Obama administration.

12 North contains themes of: 'opportunities to accept greater responsibilities come suddenly into the life; new commitments likely come as a result of another person's being unable to carry on; events heralded by the eclipse may be difficult but outcomes in terms of harmony and self-esteem are positive' (paraphrasing Brady's Predictive Astrology). 12 North last occurred on January 15, 2010 @25Capricorn (opposite Trump's natal Saturn in self-protective Cancer!) and will next occur in 2028 @6Aquarius (conjunct US natal South Node). And actually, Capricorn PEs relate to authority figures, business, government, and to attempts to 'correct wrongful karmic situations' (Lineman). Some say that via Omarosa, Mr. Trump has met his match and I assert that her natal Astrology agrees!

And perhaps you agree that on some level, 12 North themes sound quite a lot like the format of TV's The Apprentice previously led by Donald Trump, the man who helped catapult Omarosa Manigault into the public eye where she has remained all these years--and the current activation of her PE themes by dutiful legal-eagle Saturn seems tangled up with Special Counsel Robert Mueller's investigation of allegations of Donald Trump's racism, his ties to Russia, his obstruction of justice, his financial crimes, his possible campaign violations, his breaking of the emoluments clause, and the demand for accountability for any and all of them which Mr. Trump hopes to avoid while undermining the White House and the presidency, and destroying America's reputation, laws, and traditions.

All this post is missing now is a hearty, kudos Omarosa!