Two days after the 2018 Midterm Elections, on November 8, 2018 at 7:40 am est, transit Jupiter enters his own sign of Sagittarius just after the New Moon of November 7th @15Sco11. Below is the DC Horoscope of this cosmic event which marks a significant shift from the Mars-Pluto energies of intense, brooding Scorpio with its materialistic outlook: 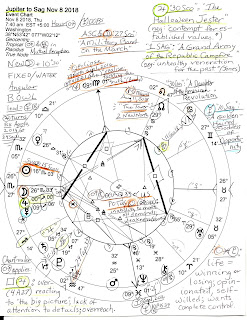 Yet as you see, the shift may not be as light as we wish for there are several chart factors denoting both financial and military matters and a president unable to meet all demands or master all situations (Ebertin). This may be seen penned into the center of the chart as the difficult 'death axis' pair of Mars and Saturn combine their energies via midpoint directly upon America's POTUS Sun position (00AQ48 on Jan 20, 2017 = Trump). And of course, the Saturnian South Node, or 'tail of the dragon', is at a critical-crisis degree of 29Cap37 in the 2nd house of Values and the National Treasury, conjoining US Progressed ('SP') Pluto Rx. That two planets of karma are posited in the 2nd house as well with sign Capricorn intercepted suggests karmic conditions which must be dealt with because even Trump and America must reap what's been sown. Note that the Pluto-SN pairing also suggests potentials for war, violence, or other large-scale events which disrupt people's lives and are too large for mere mortals to handle. Refugees crashing trough border walls are suggested.

In Sagittarius, Jupiter emphasizes potentials for justice, religious and moral aspirations, making far-reaching plans, foreign concerns, but also wastefulness and speculation. Philosophically, a hint of Marxism may be involved or even bohemianism with this placement although given present conditions in US society, attempts to convert others to a particular system of beliefs is probably on the Jupiterian menu. This reminds me of the Bush-Cheney Vulcans' deceptive "hearts and minds" propaganda as they invaded and radicalized the Middle East against the West, plus, Jupiter can also play the role of The Broadcaster, for ill or good.

Now Jupiter enters Sagittarius during a Mars Hour, as you see, and Mars rules Scorpio --'27Scorpio' is emphasized by the Ascendant and Moon rising--'27Sco' = "A Military Band on the March". Of course, this may not be America's military band on the march but with impulsive Trump in the Oval Office, all bets are off in the predictability department. With warrior planet Mars as chart-ruler, he applies only once--a square with Jupiter. Potentials for the square are penned on the chart, lower left. Plus, Jupiter as actor in a horoscope also plays many parts such as politician, financier and banker, religious figures...and military Generals.

Jupiter's karmic confrontation degree of '30Scorpio' = "The Halloween Jester" (negative expression: contempt for established values") while his position @1Sag = "A Grand Army of the Republic Campfire (negative: unhealthy veneration for the past" (The Sabian Symbols in Astrology, Marc Edmund Jones). Having a cycle of approximately 12 years, of interest is that Jupiter last entered Sagittarius in November 2006 and on November 6, 2006, Democrats gained control of both the House and Senate in the 2006 Midterm Elections. Perhaps the history of the 2018 Midterms will rhyme, if not repeat, with Jupiter entering Sagittarius.

Just behind the rising Moon and Jupiter is little Mercury @10Sag = "A Golden=Haired Goddess of Opportunity" and Mr. Trump is nothing if not an opportunist as are his cabinet members under scrutiny for misuse of public funds and other unethical practices. Of course, communicating Mercury rules reporters and political pundits as well as voters and ballots and this Mercury squares the Career Point (MC) which denotes blockages in communications. We should also mention that the Midheaven ('MC'), the Goal Point of all horoscopes, points toward the 19 North Solar Eclipse of September 1, 2016 @9Vir21 with unstable Neptune opposite at the IC (Basis) of this horoscope. 19 North themes are: realism, coming down to earth and seeing something for what it really is, and tackling the truth (Brady). And there is radical chaos-creator Uranus Rx @29Ari55 in the 5th house of Speculation and Risk-Taking and in Nodal Degree, a fated or karmic condition as is the Cancer-Capricorn interception across the 2/8 axis of Money, Debt, and Corporatism with Uranus in Aries denoting blind zealots and Utopian anarchists (Ebertin).

As for the 19 North 'realism' eclipse and fraudulent, obscuring, eroding Neptune opposing it, we continue to find ourselves mired within truth vs fiction problems in large part due to Mr. Trump's fantasy-prone Mercury-Neptune square of falsehoods, misconceptions, and indiscretion for this manifestation of a 19 North Solar Eclipse is the Prenatal Eclipse of the 2016 presidential election and of Inauguration 2017 when saboteurs foreign and domestic placed Trump's fat finger on The Button. For a glimpse of the 2016 eclipse horoscope see The 2016 Eclipse That Heralded The Prevaricator. 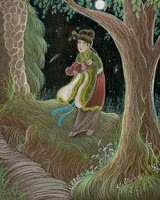 Above Image: illustration for '12Cancer' = "A Chinese Woman Nursing a Baby with a Message" which Jones relates to "real community service"; ("negative expression: completely unreasonable demands for recognition") and of course one thinks of Trump's and America's financial links to China; pencil on black paper; image available in my Fine Art America portfolio.

Email ThisBlogThis!Share to TwitterShare to FacebookShare to Pinterest
Political Astrology,Astrology,Politics 1 Sag = A Grand Army of the Republic Campfire, 27Sco = A Military Band on the March, A Chinese Woman Nursing a Baby with a Message, Donald Trump, Eclipses, Jupiter enters Sagittarius, Sabian Symbols, Vertex